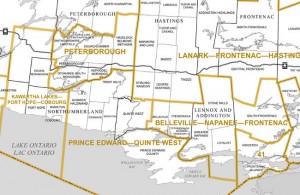 You have to give Conservative MP Barry Devolin some credit. The representative from Haliburton-Kawartha Lakes-Brock did not hesitate when he heard about he proposed changes to his riding.

Suddenly, he was joining a chorus of unhappy local politicians who described the proposed electoral boundary changes with words like inappropriate, senseless, disruptive and unbelievable, along with a host of others.

It is a far cry from the sounds of silence echoing throughout Northumberland MP Rick Norlock’s office as he has so far refused to wade into the debate over a series of changes that would see Northumberland-Quinte West disappear. It is going to be amalgamated into two other ridings. The west half of the riding would join with an area stretching as far away as Lindsay and the east half joining with Prince Edward County and Hastings.

But, maybe Norlock is following the same path as Hasting-Prince Edward MP Daryl Kramp to the east. Kramp is going on tour through the riding to gauge responses.

But neither of these representatives has sat in the House of Commons as long as Devolin, nor have they invested in developing their riding in the same manner.  Devolin made a submission to Elections Canada about his riding boundaries back in 2002, but nothing resembling the current map. He was looking to actually improve the rural-urban mix of his constituency to strengthen local democracy. So, it might make sense why he is a bit upset to see his riding suddenly from Lake Ontario to Haliburton. It is not very “local” anymore.

Still, Northumberland politicians are going to be lining up as the Federal Electoral Boundary Commission comes through Cobourg on Nov. 12 looking for input.

So far, there is nothing resembling anything short of fury from elected officials from the provincial and municipal levels. The list of adjectives is long and all are negative.

But what is most worrisome is not the adverse reaction, but the concern about what can be done to hold off the federal Conservatives. These guys have a simple philosophy: you are either with us or against us with no middle ground.

Hence, Norlock must be terrified. He does not want to cross his boss, Prime Minister Stephen Harper or anyone from inner circle.

Surely, it does not take a political genius to see people are not happy. There are not ton of letters to the editor heaping praise. But at the same time, there is not a lot of public opposition. There is no word of a petition being circulated or public meetings to give residents a chance to voice their views.

Without widespread public support, local politicians and their provincial counterparts can be easily dismissed. Despite the veracity of their arguments (and there will be many strong points to be made), the Conservatives can easily ignore these guys. Remember, the federal government hands out a lot of necessary money for both these levels to function.

It is like the old saying, you should be careful not to bite the hand that feeds you.

As long as Norlock can keep a lid on the public outcry, he is golden. He can nod his head and pretend to listen to the warden and the municipal politician with little angst.

Nobody intuitively believes these changes have anything do with population growth or changing demographics or improved representation in Ottawa. It appears to be politically motivated, simply a case of fixing ridings to ensure Conservative victories.

If Norlock or the federal government say it is not the case, then they should prove it by providing a poll-by-poll map over the last five elections. That would certainly assure citizens and politicians those in power have their hearts in the right place.

Otherwise, voters should be looking to drive a stake through the heart of this proposal in a very loud and public way.

One thought on “Prove electoral boundary changes are not political hijinks”