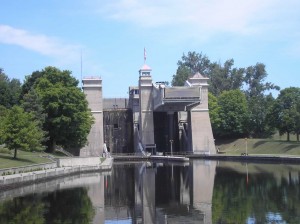 As the ice disappears on Rice Lake and the waterways of the Trent fill with runoff from the snowy fields, thoughts turn towards the upcoming summer where people can enjoy boating along the local waterways.

The 2013 boating season along the local Trent-Severn Waterway is heading into rough waters after the federal government’s decision to reduce hours of operation and increase fees last year. A major section of the waterways travels through Northumberland via Rice Lake and the eastern border of the county.

The results could leave boaters unable to move efficiently through the system, turning off tourists and locals. As well, those who make their living from the tourism and other aspects of the system, say it will drive them out of business.

Already some entrepreneurs, like cruise operator from Belleville and Orillia, are saying they will be negatively impacted. Commercial lock fees could jump to $85,000 from $5,200, according to Ontario Waterway Cruises.

Northumberland MP Rick Norlock navigates the rhetoric surrounding the changes with the deft of cagey pirate through Caribbean shoals.

If he does not appear to support the local opponents, it could cost him at the polls. Yet, Norlock is a faithful servant of his party, rarely, if ever, taking a stand against government policy or decisions.

So last week, we watched our local MP pilot the controversy with a steady hand.

He reached out to his constituents by saying it is tough going and “we’re frustrated”.

Good news is: Parks Canada, the agency in charge of the waterways is still looking at the situation, he said.

But, without taking a breath he reminds everyone the government is “obligated to meet deficit reduction numbers.”

In light of the austerity budget released last week, how could anyone believe anything else? And the zeal with which Norlock defended the economic plan to members of the chambers of commerce, he is on-side with his political masters.

At least a former Parks Canada official was brave enough to state the truth, saying the season will be shorter and operations will be cut by 30 per cent, despite promises to slowly introduce the changes over five years.

To his credit, Norlock is part of a group of MPs who are working towards making long-term changes.

He was part of a group consisting of Peterborough MP Dean Del Mastro, Haliburton-Kawartha-Lakes- Brock MP Barry Devolin, Prince Edward-Hastings MP Daryl Kramp, Quinte West Mayor John Williams and others who are looking at changing the administration of the waterway by creating a crown agency or some other authority to run it. The agency would do more than just maintain and operate the system; it would promote tourism and look for business partnerships.

It may seem like a good idea on the surface, but the subtext is clear. They want municipalities and businesses to contribute financially. In fact, listening to Norlock talk it goes even further.

“We need to move the operation of the waterway in a different direction. We have to develop the waterway into something that is efficient and operates like a business. The bureaucracy that runs the waterway doesn’t get that big picture,” he told local media.

This almost sounds like privatizing the system. At the very least, expect it to be downloaded. And, it all fits into the Conservative ideology – government is bad and wasteful, while business is good and efficient. Parks Canada’s days are numbered.

Back in December 2012, Norlock tried to put a positive spin on the situation, saying the cuts and fee increases could have been worse.  Then, he appears to have drifted into the camp opposed to the changes. But don’t be fooled. The path proposed is not meant at preserve the current system or save the waterway as a public resource. This is about jettisoning the entire mess to the private sector or cutting it adrift so local municipalities dependent on the waterway will run it and pay for it. Meanwhile, the Conservative Party will meet its deficit targets while shrinking the size of government.

Watch carefully over the next few weeks and we will see the true colours fly from the mast of this Tory pirate ship once it is close enough to sink Parks Canada and make off with the booty.