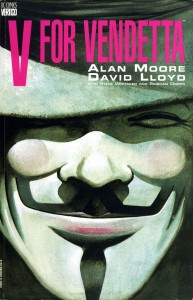 The minimal outline of a moustache is forming. The area under my nose is not so barren, but it is far from proper facial hair.

Looking at the various high-profile moustaches, it was interesting to see the Guy Fawkes masks, used in the 2006 movie V for Vendetta, appearing at the Occupy protest events. The mask appears internationally as a common sign for revolution. The creator, artist David Lloyd, is quoted as saying he is pleased the mask is being used as a symbol of protest against tyranny.

The mask is used in the movie by the main character V, a mysterious figure who is an anarchist fighting against a totalitarian government in the near future. The story first appeared in a 10-issue comic book series written by Alan Moore and illustrated by Lloyd between 1982 and 1985.

The storyline is in the tradition of George Orwell and Aldous Huxley so far as a writer making a profound commentary on the current society, even though the setting and time are set in the future.

The mask is the top-selling mask on Amazon.com, according to Time magazine.

Fawkes led a failed assassination attempt called the Gunpowder Plot against King James of England and Scotland in 1605. He was trying to light a fuse to some explosive set under parliament, but was caught in the act and hanged.

Rather than a rebel, over time Fawkes became a hero in popular legend as a rebellious figure.

There is certainly a feeling of rebellion to shave off one’s beard and grow a moustache. There is a certain freedom when it comes to styling hair, especially on ones face. There are so many different styles, each one transforming the person underneath. Facial hair is a type of mask, indeed.