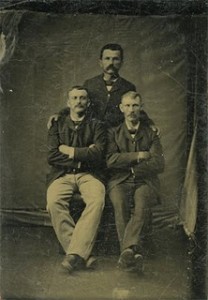 The 19th century was the golden age of moustaches. Throughout history men have grown hair above their upper lip. But, beginning in about the 1850s a wide variety of moustaches became popular across Europe and North America.

In England, military men returning from the Crimean War made moustaches popular. Many of the men let their facial hair grow on the battlefield. When they returned home, they just kept them. The walrus-style was most popular, but the long-sided whiskers merged with the moustache became known as the Franz Josef, after the Austrian emperor. In the United States, it was the handlebar, named after the curved steering bars on bicycles.

The main reason Victorians cultivated facial hair was a cultural response to the dominant French influence, which had existed for nearly 200 years. During this period, men’s fashion was to wear a wig – at first huge full bottom wigs and slowly over time, these shrank. By the 19th century this trend had faded and a more Anglo-Germanic influence began to rise with the growth of facial hair.

There is an entire website dedicated to moustaches of the 19th century. It begins:

“Dear Gentle Reader, many of the following pages have graphic and clear images of masculine mustaches (sic) in all its forms, both sublime and grotesque. My intent is not to shock of titillate, but merely to inform on the subject. The Nineteenth Centruy gave us many things, but above all it was a hotbed of facial hair experimentation and this is but a poor sampling of those many lost forms.”

There a host of great photos and explanations. Worth a visit.