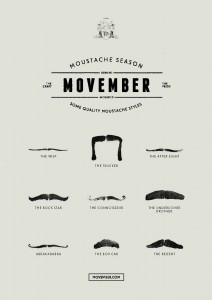 Moustache growing is serious business, at least if you are a member of the American Mustache Institute. The first thing to get right is the spelling, which is different than the British.
The institute was founded in 1965 to fight discrimination against people with moustaches. It claims to be the world’s leading facial hair advocacy organization and think tank committed to promoting the growth, care and culture of the “lower nose forest”, says its website.
Quick history lesson points to the Second World War and the decline of the moustache due to Adolph Hitler’s toothbrush-style. Men shunned the style in the 1950s and 60s, but resurgence came in the 1970s.

The Movember people have their own style guide: the wisp, the trucker, the after eight, the rock star, the connoisseur, the undercover brother, the boxcar, abracadabra and the regent.

It all gets very confusing, very quickly. And, it seems more effort than it is worth. The plan is to let it grow. The real estate under the nose will determine shape and hormones will determine length. It seems a good idea to keep the mouth clear. And, that should be it.

Those with more enthusiasm, and time on their hands, can sculpt away. For now, it would be just nice to have some facial hair back.