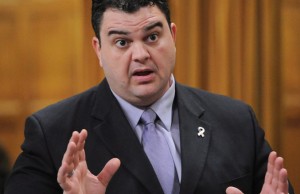 There is a foul smell wafting down the Pine Ridge from Peterborough to Northumberland County, and across the country, as Peterborough MP Dean Del Mastro faces growing allegations of election campaign irregularities.

Despite assurances from Del Mastro that he is innocent of any wrongdoing, he is fighting for his political life, which was on the rise in Ottawa before now. As parliamentary secretary for Prime Minister Stephen Harper, Del Mastro was the voice of the Conservative government on ethics in the House of Commons. And, he was moving up the political ladder.

Now, he faces serious accusations contained in a sworn affidavit from an Elections Canada investigator alleging he filed a false document during the 2008 federal campaign.

More recently, additional questions arose when published reports over the weekend said Del Mastro’s cousin was behind an alleged scheme where employees were asked to make $1,000 donations but were reimbursed for the amount plus a $50 bonus. A former employee of company signed a legal declaration vouching for the facts in the news story.

Del Mastro’s cousin emphatically denies the story, saying he did nothing more than try to raise money for the campaign. Nobody was paid any bonus, he said. A number of other employees who donated to the campaign, say they supported the Peterborough MP and did not receive any reimbursements.

This kind of political stench has a tendency to linger, regardless of whether or not formal charges are laid and the case gets played out in the courts. For Northumberland MP Rick Norlock there is reason to be concerned.

With the passage of the Omnibus Bill C 38 containing the federal budget and a host of legislative changes impacting the environment, fisheries, employment insurance and a laundry list of programs, he must be worried about people’s tolerance for the Conservatives.

Norlock and his avid supporters might easily dismiss a small band of residents calling themselves the Northumberland-Quinte Democracy Coalition for their protest against the legislation recently at his office. Yet, they were part of a much larger series of 70 protests across Canada organized by the non-partisan organization LeadNow.ca.

They should not be ignored. Just look down the road at Quebec Premier Jean Charest to see how a politician truly messed up in dealing with the protesting students in Montreal. Norlock and the Conservatives should be careful.

For example, the Canadian Association of Retired People did its own survey in the past few weeks regarding opinions related to the Omnibus Bill C 38 only to find 85 per cent wanted the bill split into separate pieces of legislation. A similar majority, 82 per cent, said they did not like the limits placed on debate. And, to top it all off, a growing number want the Conservatives to take into account the oppositions’ amendment.

Considering the number of retired people living in Northumberland, there can be little doubt this trend is reflected locally. And, retired people are often the people who go out and vote in large numbers.

It is said people are a reflection of the company they keep. The Conservatives are reeling. The lack of respect for parliament is apparent and the disdain for voters and the news media is blatant. Queen’s University Prof. Ned Franks, in an interview in the Hill Times last week, said the Conservatives are playing games to avoid scrutiny.

Well, it appears the games may be up, Mr. Norlock. If Del Mastro and the Omnibus Bill C 38 are any indication, the tipping point has arrived. Canadians don’t like hypocrites and they don’t like bullies. The local democratic coalition is only the start. If the arrogance continues, the Montreal student protests will look like a tea party.

2 thoughts on “Stench of Conservative political rot wafting towards Northumberland”