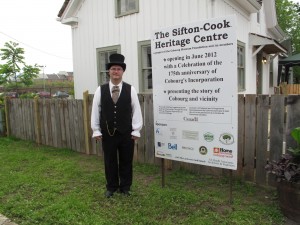 James Cockburn, aka Rob Franklin, stands outside the Sifton-Cook Museum in Cobourg following the opening ceremonies on June 9, 2012. Photo by Robert Washburn

In a time when many museums struggle to survive, two projects in West Northumberland County share a bold vision, looking to preserve the past, as well as create an opportunity for the future.

The Sifton-Cook Heritage Centre will hold its official opening this weekend launching an important place for viewing the rich and diverse history of Cobourg.

At the same time, efforts are underway to raise money for the Canadian Fire Fighters Museum in Port Hope in an effort to turn it into a national attraction and create a home for the many artifacts it has collected.

The heritage centre in Cobourg is the fruition of more than a decade of work and fundraising by a dedicated group of citizens, who originally wanted to save a limestone building located at Orr and Durham streets in the downtown.

A year after forming, the group purchased the site and worked hard to preserve it and develop it into a local museum with a focus on military history. Then in 2007, the group was given a 1860s wooden heritage cottage located next to the old Illahee Lodge on Ontario Street. It was moved to the museum site and restored.

The opening ceremony will mark a significant milestone for the town as it creates a new tourist attraction, but also a place where local history can be displayed.

While preserving history is also a goal of the firefighter’s museum, it has larger aspirations.

It was started in 1984 as a project to tell the story of firefighting in Canada. Over the years it has collected approximately 50,000 fire fighting items dating as far back as 1800. There are 10 complete fire trucks and it brags of having the largest collection of fire hydrants in the country.

With the remediation plans being undertaken, the museum was forced to move its stored items from a building at the centre pier in Port Hope and leave its Mill Street location.

So, one year ago, it rolled out an awareness campaign and started fundraising so it could find a new home. And only last week, it held one of many events to collect money involving a jail and bail, all part of a larger program.

At a time when upper levels of government are focused on economic and budget issues, these local organizations have taken a bold step.  It is not an easy task to raise money for arts or heritage in these times. People are worried about keeping their jobs or finding a new one, not preserving the past.

Still, despite the odds, these citizens have grabbed hold of a vision with the support of various individuals, companies and municipal leaders to create these great resources. They will benefit the local economy by drawing tourists to the area. And, they will also provide important educational resources to the community on local history and fire safety, as well.

History plays a vital role in a community. It is often forgotten that Northumberland County was a gateway for the settlement of our country. Some of the earliest settlements were located along the shores of Lake Ontario within its boundaries.

It is equally humbling to realize one of the oldest municipal services is being preserved so future generation can appreciate the lifesaving work done by these dedicated individuals who fight fires.

As the cliché goes: you cannot know where you are going, if you don’t know where you have been. It is good to see local volunteers are working hard to make sure we do not lose this perspective.