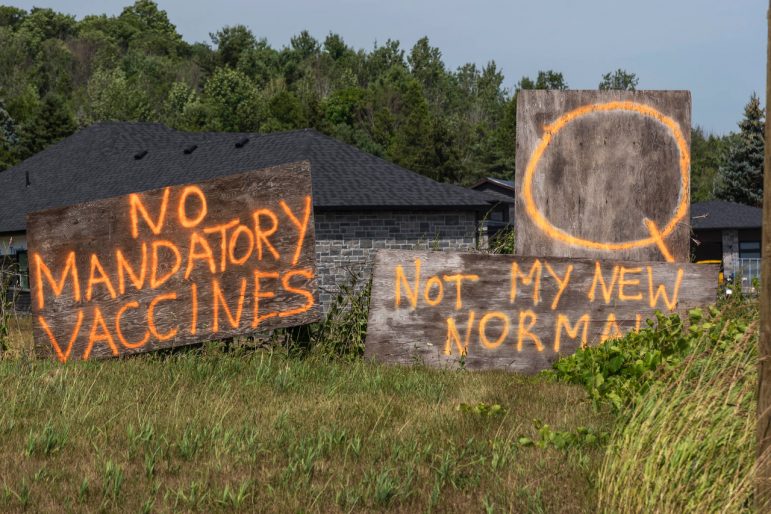 Signs found recently on the roadside near Colborne carry messages associated with the international conspiracy group QAnon. The large letter Q is sometimes an indicator. The signs were reportedly taken down in the past week. Photo by Ted Amsden.

Near Colborne on three huge pieces of old weathered plywood are spray-painted messages. They read: no mandatory vaccines, not my new normal and a third has a large letter Q.

The Q on the roadside sign can stand for QAnon, a conspiracy theory once held by far-right extremists. But it is gaining mainstream acceptance in the United States and Canada, as well as around the world.

Similar messages are being delivered across social media groups in Northumberland. They are also found in the chants of protesters and people’s conversations across the county. In fact, in one recent interview posted on a local news website, a woman suggested Microsoft founder Bill Gates was calling local municipal leaders in an effort to curb democratic rights. It is a message straight out of the QAnon playbook.

Part of the conspiracy messaging is aimed at spreading disinformation during the pandemic. This is found in the comments of anti-maskers, anti-vaxxers, and those who dispute efforts by community leaders and local health officials to control COVID-19.

In this podcast, I am pleased to welcome Marc-Andre Argentino, a Canadian expert on QAnon who has written extensively about the topic, as well as done academic studies of disinformation and its uses on social media to try and influence elections and public policy.

Here is my conversation with Concordia University public scholar Marc-Andre Argentino about the infiltration of disinformation that is impacting the community.