The attempt by several councillors to find an exception for a local businessman wanting to sell ice cream from a push cart fell on a cold hearts Monday night. 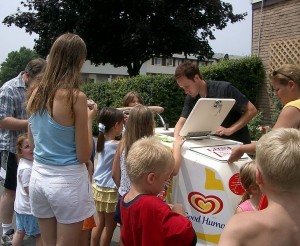 This Dickee Dee ice cream cart is similar to the one being proposed by Ryan Mullins, who wants an exception to the refreshment vehicle bylaw from council. He was rejected, but it will come back to council Monday night for final debate.

Deputy Mayor Stan Frost warned council not to support an application by Ryan Mullins for an ice cream cart bicycle, similar to the Dickee Dee carts. Mullins hopes to get special permission for a licence to ride throughout Cobourg selling ice cream in neighbourhoods from the street.
However, the refreshment vehicle bylaw bans anyone from selling food from a public roadway. The only place it is allowed is on private property. This allows fire and public health officials to inspect the premises, said Frost in an interview Tuesday.
“There are some councillor who would like to make an exception, but that would be like clipping a coupon off the bottom of the bylaw, in my view. To do that would open up to the next person who wants an exception and on you go. Pretty soon you would find yourself where people would say you are making it up as you go along,” he said in an interview.

Then, there would be more headaches for council because politicians would be making subjective judgments on whom to allow or not.

In Mullins application to the town, he argues the business will be beneficial since he will hire local students to operate the carts.

Councillor Miriam Mutton wants to see council find a way to make a room for Mullins.

“I am not convinced it was thoroughly investigated,” she said in an interview after council.  “I don’t see a push cart ice cream seller as a refreshment vehicle…It is an icebox on wheels.”

Mutton believes it falls under another category and should be treated with its own bylaw, not under the current legislation.

She is adamant she does not want to make an exception.

“I just see an opportunity for entrepreneurship, small time business, maybe with a student involved. That sort of thing,” she said.

Councillor Larry Sherwin agreed with the deputy mayor, but argued council should find a way to help Mullins because it is creating jobs in the community.

“We need to rethink this and let it happen,” he said.

Councillor Donna Todd argued the application should be supported, saying she knows of cases where people welcome this kind of vehicle. Sometimes, parents want to purchase food when park canteens are close, she said.

Even Mayor Gil Brocanier chimed in, saying the bylaw needs to be honoured because an exception would be less desirable businesses would want the same treatment.

“There may be a way to work it out,” he told council.

The application was rejected with Frost, Mutton and Councillor Forrest Rowden voting against the proposal, while Sherwin and Todd for it. Councillor John Henderson was absent.

The decision will come back for final debate on Monday night at the regular council.