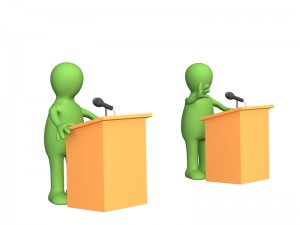 Deputy Mayor Stan Frost and Councillor Miriam Mutton clawed at each other as the mayor tried to maintain decorum over two items. While this is nothing new, it is certainly becoming tiresome and embarrassing for council.

First, Mutton raised concern a small fund the town is going to set aside to provide emergency financial aid to municipalities facing a disaster. This is not the mutual aid normally done between local municipalities, where a state of emergency is called and the town sends firefighters and police to help. (Think the train derailment in Hamilton Township just over a year ago).

This fund is meant for places far away who ask for financial help because they are so far away Cobourg could not send people and equipment (like Goderich following the tornado, which destroyed its downtown. It asked for financial help.)

Mutton asked for two things: the amount of the donation should come before council for approval and an annual report be generated to show how much was given during a fiscal year.

Neither request is unreasonable. But somehow Mutton got people’s backs up. The mayor told her the request for donations would be coming back to council. He got Chief Executive Officer Stephen Peacock to confirm it. But, Frost jumped on the point, sounding exasperated, trying to get her to back off, saying this provision was already included in the report brought before council the previous week. She lunged at the suggestions she missed something and dug her heels in.

As is the case so many times in the past, a reasonable suggestion is lost on Mutton. Her lack of procedural skills had her scrambling. She tried to make a “friendly amendment”. The mayor refused. Again, Mutton dug in her heels, saying others on council used this approach, but she could not. The mayor insisted she make an official amendment, as demanded by proper procedure. She did.

Next, the town confirmed its use of the slogan: Ontario’s Feel Good Town. This time Mutton was less articulate. She did not like the slogan. She appeared to want the slogan revisited by staff and committees. The mayor reminded her that two marketing experts sit on the committee that came up with the idea. He said councillors are not marketing experts and should heed the advice of those who are.

Mutton would have none of it. As she spoke, she chided Frost, saying he was ignoring her while she held the floor.

The councillor has a longstanding problem with the slogan. In April 2011, she took a run at getting it changed. And, she is not alone. Yet, again, her lack of political savvy led to her failure to move what may be a good idea into reality.

It may seem unfair to target Mutton’s behavior. Other councillors mess up when it comes to procedure. And, not every councillor gets what they want, despite some good suggestions.

But Mutton draws attention to herself. It is rare when she is not standing up on nearly every item with something to say. It is as if she feels if she does not say something an important political opportunity is missed – whether an item on the agenda, or a bylaw or presenter or delegation.

It is like those celebrities who complain about the entertainment media intruding on their lives. These movie and music stars seek fame to advance their careers and make gobs of money. Yet, when they reach the status they seek, suddenly they want privacy.

It is also very poor politics to portray herself as a victim. Her digs at the mayor and deputy mayor Monday night were inappropriate. Smart people will see the unfairness if it exists. By pointing it out, she wants the public’s empathy. Instead, it makes her look like a schoolmarm, telling off the boys in her class. It is also disrespectful and demeaning to them. (It’s ironic since she wants respect from them.) After six years, she should have a much tougher skin.

Mutton is sincere in her efforts. And, she has some good ideas, worthy of consideration. However, he lack of political skill was demonstrated once more on the floor of the council chambers.

What is worse is Frost’s inability to control his temper. He may want to argue he is frustrated. But, that is a luxury that cannot be afforded in politics. And, if he can’t control himself, then maybe he should not seek election or even step down from his portfolio.

Meanwhile, Mayor Gil Brocanier must intervene. He already is doing so. By not allowing the “friendly amendment” he is demanding the kind of discipline necessary to control debate. While Mutton might not like it, she brought this on herself with in lack of knowledge.

Still, it gives the appearance of chaos at council. There is nothing wrong with good, high-spirited debate. But the acrimony between Frost and Mutton needs to stop. He must find a way to get these two settled down. A professional mediator might be the only method. Whatever it takes, it needs to happen now.

Frost and Mutton should also go home and have a long look in the mirror. Neither can blame anyone else for what is going on. Rather than keep coming to the council chamber with the same approach, it may be time for a change in strategy. Now would be better than later.

One thought on “Time to intervene between Frost and Mutton”