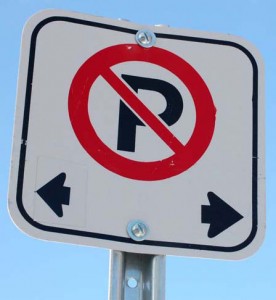 All of a sudden, parking has become a big issue in Cobourg. Last summer it was parking by visitors at the beach – despite signage, parking was allowed on the pier and no waterfront parking was free, even for residents. The residents in the new (white) waterfront condos are unhappy because not enough visitor’s parking required by the building permits. They pay taxes so they expected to be able to park on the waterfront but now, that’s very limited. This is not an easy problem since other residents also want to park on the waterfront in the summer.
And now we have the Amherst development where some residents are abusing the system. The intent of the development was that people would use the lanes at the rear for access so there would never be any need for street parking. Caddy Drive was featured in newspaper reports but Prince Edward Drive also has a problem. Because at least one resident has multiple vehicles, they park some of them on the street. One resident does not even use their double garage – it is full of other stuff.
Snow ploughs and fire trucks have reported difficulty getting down these streets so the town is wanting to enforce bylaws that would prohibit parking on at least one side of the street. Some residents are objecting and these are getting reported by the newspapers. If you talk to the residents you find that many are happy with the council’s plan. The complainers say that the problem is the council’s responsibility since they approved the plan. I can’t agree – if anyone is to blame, it’s the developers for not making it clear to buyers as to what was planned.
Another older development that has an ongoing problem is the so-called Hoffman waterfront condos. Not enough visitor parking was allocated during construction and Hoffman always promised – “it will be in the next phase”. Then he went bankrupt and the next phase never arrived. Now it’s a perpetual headache.
The other ongoing parking headache hanging over us is the question of downtown parking. This is currently only adequate because of the Quigley vacant land that is temporarily used for parking. What will happen when that gets developed? It’s too valuable to stay as a parking lot forever. Does Cobourg have a plan to replace that parking? Perhaps the council would like to follow up on transparency and let us in on the secret – if there is one.
The latest fuss about parking in Cobourg is the issuance of free parking passes – 793 of them. The issue is NOT the loss of revenue but the fact that the only reasons for issuing them are one-by-one decisions – there should be an overall strategy that says why passes are issued. Why some residents and not others, why some groups and not others. I am sure there will be people who are wondering why they are not on the list.
It’s time the Cobourg planning department put some effort into planning the whole range of parking problems in the town. Or if they already have, maybe they could publish a report of what they have decided.

One thought on “Cobourg’s parking mess”