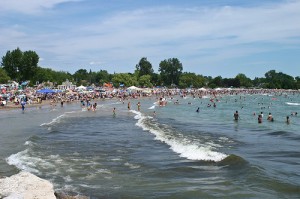 Cobourg beach in the summer time

A delay in approving an annual provincial volleyball tournament in June for Cobourg beach will not affect the event, says the vice-president of the Ontario Volleyball Association Thursday.
Gord Ley, who represents the organization holding the Ontario Volleyball Association Beach Volleyball Tournaments on the weekends of June 18, June 25 and July 16, said he is not worried about council’s decision to table the approval of this year’s events. The same tournaments took place over the last three years.
“No, I don’t think so,” he said.
Ley is a founding member of the Northumberland Breakers Volleyball Club, which has more than 200 athletes, where he has served as beach director, coach and assistant coach.

The delay was approved at the request of Councillor Donna Todd, who is the Coordinator of Community Services and the councillor responsible for all events held in the town.

“I just need some clarification on the implications on the cost for the town and parks,” she said Monday night after the meeting. “ When it comes to amplification of the sound systems, I want to make sure that there are some checks and balances in place.”

In a report to council from Lara Scott, the town’s events coordinator,  said the application was cleared with the public works department, the business and tourism office and reviewed by the Community Events Committee, which Todd sits on.

Under the section regarding financial implications, Scott provides a single sentence.

“An event tracking system is in place for each event and a post-event evaluation will be completed,” she writes.

Todd told council this was not good enough.

“We need to get details,” she said addressing council. “I find this report lacking.”

She was not alone, as Councillor Miriam Mutton added her voice to the discussion.

“We need a better understanding of events. This event has occurred in the past and I know we measure them. But where is the record,” she asked.

Mutton echoed concerns about the sound affecting the surrounding area, including Victoria Park and the homes in the nearby neighbourhood. She also raised concerns about whether or not the volleyball association pays a fee for the use of the beach.

Mayor Gil Brocanier told council both national and provincial events took place on the beach in the past. Council’s practice with the previous members was to not charge due to the economic benefits. Players and spectators buy food, stay in hotels, and purchase other things, he told council.

Mutton responded by saying the group collects money from participants and it is not a charitable organization. It should pay a fee to the town for using the beach, she argued.

Ley said the volleyball association charges an $80 per team entry fee.  Each team consists of two players.  Last year, when Cobourg hosted a similar event in July, there were 58 courts used on a Saturday with 42 courts the following day.

”It is a break even proposition,” Ley said. “The fees pay for the set up, tear down and the administration.”

Deputy Mayor Stan Frost and Councillor Forrest Rowdwn did not agree with the delay. When it came to a vote, they were opposed, while councillors Larry Sherwin, Mutton and Todd were in favour. Councillor John Henderson was absent.

“These dates are coming up very soon,” Frost warned Todd after the vote. “You better move quickly. You need to deal with it.”

Todd said after the meeting she will make sure it is back in time to ensure the events can be held.