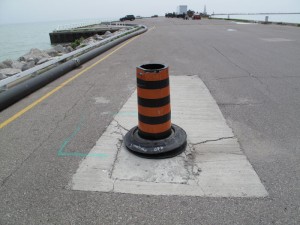 Cobourg's east pier is seriously damaged, but recent repairs mean it is safe enough for Canada Day celebrations, says Councillor Larry Sherwin. The rides are staged on the pier for the Waterfront Festival. Photo by Robert Washburn

Cobourg’s east pier is falling apart, but officials say it is safe enough to hold the annual Canada Day Waterfront Festival, but not much more.
Councillor Larry Sherwin told the Parks and Recreation committee Thursday the east pier in Cobourg harbor has numerous voids, open spaces within the structure that are weak and could collapse.
Remedial actions are already in place and he assured the committee it was safe enough to have cars drive on it and the carnival rides for the Waterfront Festival, held on the Canada Day weekend, would be alright.
Still, the town cannot ignore the state of the overall pier and residents should not turn a blind eye either.
“You should be concerned.  There are problems with the pier. We are addressing that situation. We are having a study redone regarding the voids to find out where they are and how we can fix them. For this year, we have done our due diligence,” Sherwin said in an interview after the meeting.

Officials from the town met with Cobourg Rotary, who organizes the Waterfront Festival. Also, Fire Chief Al Mann has reviewed the situation for any risks and deemed it safe, Sherwin said.

“They are comfortable for the remainder of the season,” he said.

Rocks and cement were poured into some areas to strengthen the pier. However, the situation continues to deteriorate as water seepage and other factors wear down the structure.

Town staff is currently working to have a study begin this fall to determine where all the voids are and what it would take to fix them. Sherwin hopes the town will be able to move to repair all the damage.

The cost to replace the pier would be astronomical,” he told the committee, adding it would likely mean a smaller structure that would not allow cars or other activities.

Town council will be asked to determine what is next.