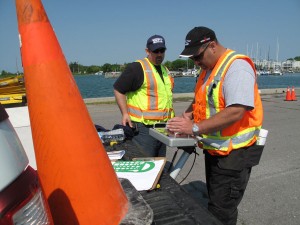 Cobourg’s east pier was closed Wednesday as a two-man crew undertook an electro-magnetic survey to determine how safe it is for the upcoming Waterfront Festival.
Jamie Broadburn and Ryan Grinton, of TSH/TBE Subsurface Engineering in Whitby, were out early in the morning setting up their equipment to take a test to determine whether or not there are holes inside the structure known as voids in the east pier.
The equipment, which looks like a very high-tech lawnmower, runs across the surface sending out a magnetic wave, similar to radar, which provides an image that can be interpreted, Bradburn said. This will help them determine how many voids there are and where they are located.
“You see this kind of thing on CSI (a popular forensic sciences television show),” Bradburn said. “But it does not show a body. But it lets you see what is down there.”

The tests are being done to determine the safety of the east pier, which is used by the Rotary Club for the midway rides for the Waterfront Festival taking place on Canada Day weekend.

The town and the club have a plan to deal with the void using steel plates to distribute the weight of the rides. Public Works Director Barry Thrasher said the plan reduces any risk to a reasonable level.

However, Councillor John Henderson, who raised the safety issue at council on June 6, said he is worried about public safety and the possible liability of the town, if an accident should happen.

Council granted the Rotary Club its event permit on June 13 with a proviso pending the results of the tests being carried out. Thrasher said a report will be available shortly, hopefully before next Monday.