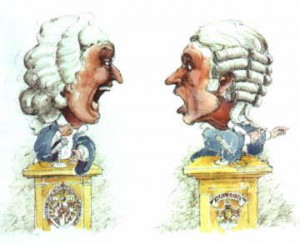 Thanks to the Burd Report for its mention of my recent posting on the conflict of interest allegations at Port Hope council.

The Burd Report wants to disagree over the interpretation of the provincial conflict of interest legislation, saying Deputy Mayor Jeff Gilmer is denying he has a conflict of interest over the policing issue because his brother-in- law is an OPP office. The laws under the Municipal Act limit the definition to those related to pecuniary interests – in other words: you cannot profit from a council decision.

Fine. As state in the posting, Consider This has no interest in debating the deputy mayor’s status since there are far more qualified people who can do it and will be correct.

The Burd Report is quite also on the ball when it states there are other forms of conflict of interest involving the appears to influence an objective exercise of duties. This certainly comes closer to the point.

This is about transparency.  In a democracy, citizens have a right to know how their representatives come to a decision and defend their stance to the public. There is an OPP member in the family may make him more qualified or bias. Who knows? But, he needs to be held accountable so when the next election comes around in two years, voters can make a choice at the ballot box.

Where Thompson gets into trouble is in the appearance of manipulation. This is a tight vote on an emotional, controversial issue. As a responsible leader, she need to ensure the entire process is squeaky clean and crystal clear. While she may possess the knowledge to correctly interpret the Municipal Act, her political instincts should tell her to get an outside ombudsman to do the job to the waters are not muddied.

Her conflict comes about as a result of an arrogance and disrespect. Her desire to reach a particular outcome has blinded her judgment, making her act in self-interest by dismissing the allegations against the deputy mayor; instead of acting to uphold democratic principles. It is lousy management, poor politics and lazy. Port Hope residents, either for or against, deserve her best efforts because she represents all citizens, not just those who agree with her.

Ah, but this is nothing new under her tenure. As we have seen time and again, she and some others on council have no time for citizenry and this is accounts for the democratic deficit.

While we disagree slightly, overall, it appears the Burd Report holds these same truths to be self-evident. Nice.