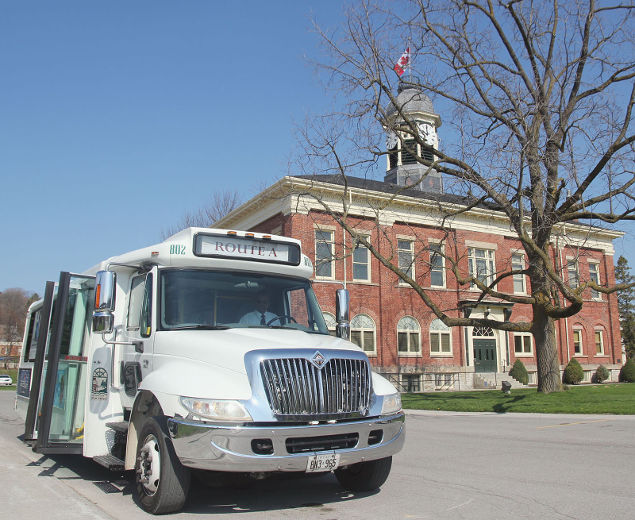 Port Hope’s public transit system is hanging in the balance as politicians consider its future in what could be the most divisive move by council since its election.

It currently costs the municipality about $450,000 to run. But a number of pending expenses jack this figure over the next four years, as equipment is replace. It currently operates at about a $200,000 deficit, according to the report.

If the town goes ahead and keeps the current service, with all the additional expenditures and the ongoing deficit, the town will fork out about $1.7 million in the short-term.

The debate is over whether or not council will approve the capital expenditures or use the opportunity to overhaul the system.

The options are pretty simple beyond the status quo. The town is looking at an on-demand system, killing the system or raising fares.

The on-demand system means users will call a central phone number and request a bus stop at a particular existing point on the route. It is meant to reduce the number of trips, extending the life of the existing buses and dramatically reduce the need for replacing equipment.

The elimination of the system is pretty straightforward. Users would be left to find alternatives.

Hiking fees would raise about an additional $20,000 approximately, barely covering the projected deficits.

Eliminating the transit system will certainly outrage some people. The question will be who and how influential these people are going to be when lobbying council.

Those on limited income will be hit the hardest since they typically use public transit. This will include seniors and the poor. These also tend to be segments of society not usually politically active or able to easily mobilize to voice concerns.

And, as we have seen in the past, this council can be rather ruthless in its approach, not always caring about the human impact, but obsessed with keeping costs down and taxes low.

In its cleanest form, council could simple ask if people are prepared to pay increased taxes over the next few years to cover the costs of maintaining the system. Notably, the report does not put the figures in terms of impact on the tax levy.

This would give politicians hell-bent on freezing or lowering taxes an out by the next election, placing the decision with the public not them.

There is also not a plan showing the impact on the budget if money was borrowed, usually called a debenture, and the costs were spread over a longer term, lessening the immediate impact.

But, beyond the superficial debate is a much deeper one. Port Hope seeks to be an age-friendly town, yet this could shed light on just how serious a commitment is being made to seniors. It also reflects politician’s attitudes toward those on limited incomes, saying those on the fringes do not matter.

Despite the rhetoric, government is not a business, but exists to serve the public. The true test is not the final decision, but the path getting to it.

How hard will councillors work to ensure all voices are heard and respected beyond those traditionally before them?