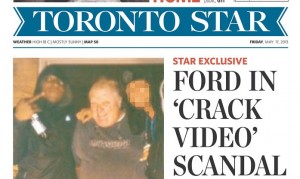 The journalism practices driving the Rob Ford story are deeply disturbing, damaging audience trust and credibility, not just for the Toronto Star but also for anyone wanting to do serious journalism.

Globe and Mail columnist Lysiane Gagnon takes a pretty good shot at the heart of this issue in her column yesterday arguing social media is to blame for the actions of journalists.

While this is one way to look at why the Toronto Star decided to publish a story about a cellphone video of Toronto Mayor Rob Ford allegedly inhaling from what is being described as a crack pipe, there is a more invasive influence at work: celebrity journalism.

For at least three decades, entertainment journalism has infiltrated hard news reporting. At the beginning, it was television news shows that felt the pressures of upstart programs like Entertainment Tonight in the 1980s. Shorter stories, flashy graphics, quicker paced presentations and constant promotion of upcoming items migrated into broadcasts. (Today, it would be heresy not to do any of these as a matter of course.)

From, these humble beginnings, the practices of celebrity journalism have slowly and continuously filtered into other forms of journalism. As Gagnon rightly points out, serious news organizations would never publish or broadcast unsubstantiated rumours like these in the past. Basic texts like Elements of Journalism by Tom Rosenstiel and Bill Kovach specifically address a key aspect of journalism as a process of verification.

Maybe more importantly, the Society of Professional Journalists, one of the oldest journalism organizations in North America, specifically states in its code of ethics,

“Test the accuracy of information from all sources and exercise care to avoid inadvertent error. Deliberate distortion is never permissible.”

Without the video in hand, there is no way to test the veracity of the images or to even put them into the public realm, at the very least, to allow the audience to decide if they are ready to believe it is true or not.

But, in celebrity journalism rumours and half-truths flourish. This is the lifeblood of this form, where one day an allegation is made through social media or some unidentified source; and the next day the vehement denials gush forth like an untapped oil well. Journalists are rarely asked to verify the facts, but simply take everything at face value, claiming a rumour is crushed or discounted only because there is a denial. Back and forth it goes. For the most part, it is not even news but merely spectacle provided to keep us distracted and amused.

None of this belongs in serious journalism.

Still, due to the pervasive nature of celebrity journalism in our culture, it is accepted. So, the Toronto Star publishes its stories and other news organizations jumping on the bandwagon. Rather than doing their own journalism, these journalists repeat the information ad nauseum until it starts to feel like fact rather than rumour. Then, the distortion becomes so grotesque, it is treated as a legitimate news item; yet the foundation is simply sand.

One of journalism’s primary obligations must be to the truth – not the absolute version philosophers like to wax about in university classrooms – but to the truth within a moment. It is a snapshot. But, the truth must be clearly in focus. This is certainly not the current case in the Ford story.

For that to happen newsrooms must slow down and remember our first loyalty is to the audience, as well as to exercise the discipline of verification. Saying two reporters saw something is thin gruel in this case when so much is at stake.

Social media has influence journalism practices. One of the major ways is in the speed in which news is reported. It might be wise for newsroom to start shrugging off the desire to rush to publish first. In a world where social media does propagate a huge amount of misinformation, journalism must remain a bastion of accuracy, trust and credibility if it hopes to remain relevant.

In the case of the Toronto Star, it has failed in this regard. It was a mistake to publish without the video in hand. And, if it could not be obtained, then the newspaper should have waited. If Gawker beat them to the story, so be it. It practices celebrity journalism. Audiences would expect this. It should not be what is expected from a once respected news organization.