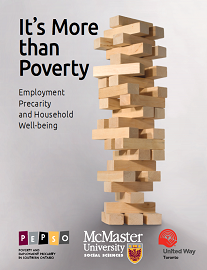 As Northumberland municipal leaders focus great energy these days trying to revitalize downtown businesses or retain manufacturers as part of local economic development, little is being done to make sure working people are getting the same attention.

A study released earlier this week says about 60 per cent of adult workers in Toronto and Hamilton areas have permanent jobs. The other 40 per cent work in what is called precarious employment, meaning the jobs are temporary, part-time or contract. Because these jobs do not provide stable paycheques, it means these men and women are less likely to buy a house, have children or do many other things most people who have full-time work with benefits can do.

The study, titled It’s More Than Poverty, was done for the United Way by researchers at McMaster University. It concludes people who face precarious employment tend to not get married, suffer from anxiety, do less with family and friends. Simply, these people face increased stress on their home life and limit their participation in community. And, of course, in situations where there are children, it impacts them even more.

Certainly, the study did not cover Northumberland. But, it is not hard to imagine similar issues exist here.

Take for example, an economic update delivered by Cobourg Economic Development Officer Wendy Gibson Monday night at council. She reported the number of retail businesses were up while the number of manufacturers is down. While there were some gains in jobs in the retail and manufacturing sector, there were substantial losses in the service sector.

Retailers often hire people on a part-time basis to save costs on benefits. These jobs also generally pay lower salaries (likely minimum wage), as compared to those working in factories where workers often receive better wages, benefits and job security. Most often, these tend to be unionized workplaces.

Even when manufacturers come to the area, they tend to outsource hiring to local temporary employment agencies. This way, jobs are handed out as contract work rather than hiring full-time employees. Again, it saves the company paying benefits and keeps wages low.

Economic development strategies tend to focus on attracting and keeping business. When it comes to discussing jobs, it tends to focus on training and upgrading skills to meet the demands of industry or business.

Nobody wants to deal with the issue of the quality of the work being brought to the community. Most municipalities are so happy to get an industry to locate here, there is little thought given to how many full-time jobs are created, the wages offered, benefits and so forth. There is never a report comparing the number of full-time jobs promised with the actual number after the company opens.

There was even a time when municipal politicians actually worried about keeping young people employed in the community once they finished their education.  The idea was to have them come back to Northumberland to work and have a family. Anyone suggesting this today would be called a fool.

If the study is right, then what does that mean for communities in Northumberland? Will anyone be able to afford a home? Will people not want to live here in the future because there are no decent jobs? How will this affect the tax base? One could go so far as to ask how will any service clubs or organizations dependent on volunteers survive, since precarious workers tend to be less involved in the community?

It is too easy for local politicians to ignore this study saying employment is a provincial or federal responsibility. But the repercussions related to precarious employment will have a direct impact. It is incumbent for municipal leaders to start gathering the necessary information and exploring the effect on the community in order to lobby strongly to address this issue. Otherwise, in the long-term, it could place Northumberland in its own precarious position.