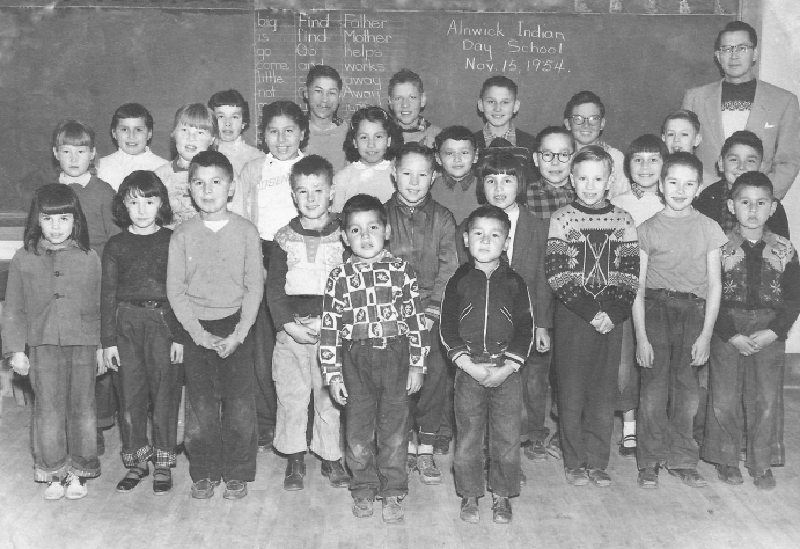 A class picture from 1954, with teacher John Loukes, taken at the Alnwick Indian Day School, as it was called at the time. Photo from website A History of Rice Lake Indians by Mary Jane Muskratte Simpson.

That was made really clear during my conversation with this week’s guest, Brian Beaver. He is a band council member for the Alderville Frist Nations. He was born and raised in the community. Then, he went off and worked elsewhere. But he eventually returned. One of his jobs was working for the Canadian Human Rights Commission developing policy. He knows a lot about racism – not just from his career but also from his life experiences.

This is the fourth in a series of interviews exploring racism in Northumberland County. The show has looked at racism in terms of the incident of racist graffiti found in Hamilton Township and Port Hope back in October. Then, we looked at a group of friends who started an initiative to end discrimination in response to a woman’s racism experiences in Cobourg. Next, we spoke with Cobourg Councillor Emily Chorley about the town council’s efforts to create an Equity, Diversity, and Inclusion advisory committee. It was a chance to see how a municipality is tackling racism within the county.

This interview is different. It examines the nature of racism in the context of both institutions and individuals. Brian Beaver reflects on the hundreds of years of policies, regulations, and structures to exploit, undermine, and assimilate Indigenous people. This was done across Canada and locally. And, as he unravels the Gordion knot of these actions, he reveals not only the systemic nature of racism but something deeper. He calls it attitudinal racism.

The fascinating thing about this interview was the free flow of ideas. At points, it felt more like a discussion than a formal back and forth question and answer interview. In the second segment, Brian Beaver reflects on some more personal aspects of his experience with racism. From his childhood in Alderville to leaving to get a higher education and on to a career. You will hear how he was lucky not to be taken away to a residential school. Although he was able to live at home and surrounded by family and friends, the government’s efforts to undermine Indigenous culture and assimilate him were at work.

Brian will also talk about Northumberland’s situation and what can be done to improve relations with the Indigenous community.

The interview is filled with unique ideas and insights. Listen carefully as he talks about how he sees racism expressed by individuals. He offers a unique perspective on how we can address those who hold racist views. It might surprise you. It certainly surprised me.