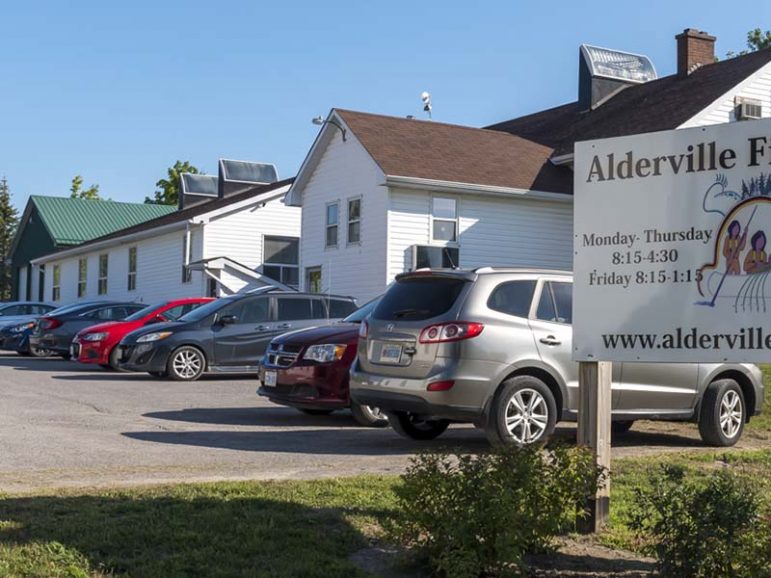 The old Alderville Day School is now an administration building for the band council on Second Line Road, just east of County Road 45. It was built after the Industrial School burned down. The Industrial School was built in 1837 and it was the precursor to the residential school system. Photo courtesy of Ted Amsden Photography.

Sitting on the Second Line Road, just a short drive east of the Alderville Memorial on County Road 45, is a white, long building next to a very old United Church.

The elongated building stretching back from the road is home to the administration offices of the Alderville First Nation. But before that, it was a Day School for the local Indigenous community. Prior to that, it was an industrial school dating back to 1838 when the government of Upper Canada decided it wanted to train boys from Indigenous communities. They took these children from their families in Alderville, Mud Lake, and Lake Scugog to turn them into tradespeople.

There would be two of these industrial schools built at the time, one in Alderville and the other in Mount Elgin, near St. Thomas. These would be the forerunners of the residential schools, which the Macdonald government would create in the 1880s and last until 1996. The devastation caused by these schools would crash into the consciousness of Canadians through the work of the Truth and Reconciliation Commission between 2008 and 2015.

The country would learn Indigenous families would have no choice. Their children would be taken away to go to a residential school to live far from home or attend a nearby day school, like the one in Alderville.

The legacy of the residential school system continues to be felt today.

September 30 is Orange Shirt Day. It was started in 2013. Its purpose to think about Indigenous children – in the past, the present, and the future.

In the past, we should recall the traumas of the residential school system. In the present, we face the harm caused to children removed from their families to either be adopted or placed in foster care. And, in the future, we look to a time when Indigenous children will share the same rights and opportunities as all Canadian children.

This past Wednesday, Alderville Chief Dave Mowat addressed Northumberland County Council to talk about Orange Shirt Day. Before he spoke to them, he sat down with Consider This to share his own ideas, thoughts, and personal reflections, its history, its impact on Indigenous people across the country, and in Northumberland. He also shared his personal stories about those he knew who were touched by the system.

Here is my interview with Chief Dave Mowat.