From the ashes of uncertainty, a new curling club will rise up to occupy the old Jack Heenan Arena, according to town officials this week.

The final touches are being put on a contract between the town and the newly formed West Northumberland Curling Club to use the Jack Heenan Arena on Furnace Street based on a full cost recovery basis, meaning residents will not pay anything for the nearly 30-year old facility, said Chief Administrative Officer Stephen Peacock Tuesday. 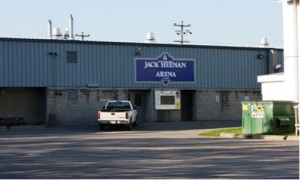 Jack Heenan Arena is set to become the new home for the West Northumberland Curling Club.

Mayor Gil Brocanier said is enthusiastic about the deal, which is estimated to save the town more than $300,000 a year.
“It is a good thing because it will save the taxpayers money,’ he said.
The agreement comes out of months of work by town staff, which began a process almost 18 months ago, Peacock explained. As part of the new Cobourg Community Centre project, the question of the future of the old Memorial Arena and Jack Heenan Arena was up in the air.

The town decided it only needed three pads to meet the current demands for ice time. Due to the historic nature of the Memorial Arena, which was opened in February 1954, it was decided the town would keep it and see what could be done with the Heenan arena, which was built in the 1970s.

Under the operating advisory committee for the community centre, in July 2009, it sought input from a long list of various user groups, including recreational groups, social clubs, services clubs and so on, to see if they might want to use the dormant arena. After consulting with 120 organizations, only two were interested: indoor soccer and the newly formed curling club, said Peacock.

Under strict guidelines from town council to lease only to an organization that could financially sustain the facility, the curling club was the only suitable group, Peacock added.

“One of the key components was that we were looking for that type of commitment,” he said.

Council endorsed the committee’s recommendations and negotiations began, he said.

At no time did the town want to sell the building.

“It is still a good asset and it would be very shortsighted if we got rid of it,” Peacock said.

When a financial analysis was done, it would cost the town $30,000 per month to mothball the building, including insurance costs and security.

Brocanier sees a huge benefit for both council and residents.

“It is going to be good for curling, not just in Cobourg, but for the whole area,” he said.

The proposal submitted by the fledgling group includes a junior curling program to introduce young people to the sport.

Selling the building was never an option for the mayor.

“I can’t imagine selling it off. We were not sure we wanted to get rid of it. It is an asset to the town of Cobourg. And, who knows what is going to happen in the future,” he said.

The contract will be a five-year lease.

Already some concerns were raised at Cobourg council Monday night. Parking is a key issue. The gravel parking lot does not have a set number of spaces and there are questions around what will happen if a large event takes place.

Councillor Miriam Mutton asked what would happen on the side streets near the arena.

Peacock said the issue will be dealt with in the leasing agreement and arrangements will need to be made so there is not any impact.

There is also some concern about what will happen during the three to four-month off-season.

Peacock said there would be provisions in the agreement to allow the facility to be used by other organizations.

While the contract negotiations are taking place behind closed doors, Peacock said the full agreement would be made public once council approves it.