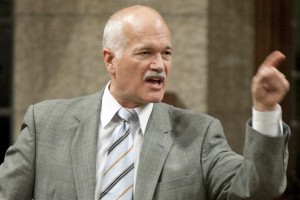 Back in the mid-1980s, I was bold enough to start my own newspaper, The West Downtowner, with a good friend from university.It was an exciting enterprise. We published 10,000 newspapers covering an area stretching from Lake Ontario north to Bloor Street, from Bathurst to Yonge Street. As a young man of 25, I felt like I had the world by the tail. Having just completed my first year at Ryerson studying journalism, I was having difficulty finding a summer job in my field. I would publish this paper. If it was successful, I would keep on going. If not, it was a good way to spend the summer.

We had an office on Charles Street on the Victoria University Campus of U of T.  My friend handled the production, there was one sales person and we had a reporter. I was co-publisher, salesman, reporter and editor. I also washed the floors and cleaned windows.

Jack Layton was the councillor for our area. He wrote a fabulous letter supporting the paper, which we used to show advertisers as a means to gain credibility. He took our calls and answered our questions. He was a focal point in coverage for our community newspaper.

Within no time, controversy arose. A local restaurant called the Coconut Grove was having some licensing problems and we got a hold of the story. The coverage shone a poor light on Layton and I know he was not happy.

One day, just after the story ran, we received visitors. They felt the newspaper should have a community editorial board made up of citizens to advise us on the content of the newspaper. In fact, they were able to give us a list of suggested people who might be ideal for the board.

I recall clearly looking one of the gentlemen who stood in our office and told him that if anyone wanted to participate in the running of the newspaper that would be fine. They should meet us on Tuesday night at 7 p.m. That was when we started delivering our 10,000 newspapers door-to-door. It took all night, usually finishing around 6 or 7 a.m.

The group said nothing. They stood up and left. Nobody showed up Tuesday night. No one from the group ever came back to the office to follow up.

A week or so later, I was at an event. Layton was there. I notice the various members of the group talking to him, obviously very friendly.

I learned an important lesson about politics and journalism.

The paper did not last. I still have copies. Sometimes, when going through stuff, I come across them and smile.

From that point on, I watched Layton very carefully. Even when I worked elsewhere in the country, I followed him. His ambition and his political savvy were always apparent to me. As the years passed, we crossed paths. When I did interviews, I did not mention how we knew each other from the past. With all the people he knew, I doubted he would remember a young journalist who published a paper for less than four months in his ward.

My interest in him was driven by my sense of our shared passion for our work. He loved politics and it was obvious. I felt the same about journalism. When we were talking to each other, I sensed the incredible intensity burning out of both of us. I can still picture him in my mind all these years later because it was so strong.

During this most recent election, he seemed to hit his stride. His message was clear and he appeared at peace with himself and his role in politics. I think people truly connected with it. While I did not agree with everything he stood for, I respected him. We have lost a truly great Canadian.

One thought on “My Jack Layton story”