While roads and sewers are not sexy topics in municipal politics, Cobourg Mayor Gil Brocanier says it cannot be ignored when it comes to how taxes are spent. 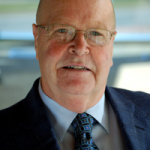 So, it should be no surprise to know Brocanier spent a portion of  his time at the Federation of Canadian Municipalities Conference in Halifax attending a workshop of municipal infrastructure.
“People don’t realize how important this is to a place like Cobourg,” he said.
The mayor went on to explain how a local developer compared Cobourg to other municipalities where he builds projects. The poor roads meant it was more difficult to sell the new homes compared to Cobourg, where the roads are in better shape, he said.
Brocanier was pleased to learn the federal government is making a long-term commitment to funding project related infrastructure like roads, sewers and public transit.

Canadian municipalities face a $125 billion infastrucutre deficit, meaning there are bridges; water mains and similar items that are in desperate need of repair.

The mayor said it is vital municipalities stay on top of these kinds of projects.

“You take a look at Mississauga, where they kept municipal taxes artificially low,” he said. “Now, it faces a backlog. It is in real trouble.”

The town’s public works budget is slightly more than $3 million, more than any other department. The town will spend $2.4 million on capital projects, those normally associated with infrastructure projects.

The federal government is expected to make its $2 billion contribution from the Gas Tax fund permanent, as well.

According to the Federation of Canadian Municipalities, for every $1 billion invested, it creates 11,000 jobs, with more than half of those in the construction section.

Besides the workshop on municipal infrastructure, Brocanier  attended a seminar on Safe Street, looking at various policing initiatives. One key lesson was the importace of partnerships.

“I must give Chief (Paul) Sweet a lot of credit. We already work with other police forces, like Durham Region, where we share services like forensics,” he said. “That is a real benefit.”

Brocanier also attended a seminar on the economic benefits of twinning. Cobourg twinned with Coburg, Germany starting in 1997 and ended earlier this year. It also partnered with Malawi, Africa in the 1990s.

While twinnings between cities is viable and has demonstrated benefits, it is not the same for smaller municipalities, he said.

The Federation of Canadian Municipalities held its 74th annual convention in Halifax from June 3 to 6. It lobbies on behalf of its 2,000 members who represent municipalities across the country.