An inexpensive tourism study about the Sandcastle Festival is paying big dividends in Cobourg, the tourism events coordinator said Thursday. 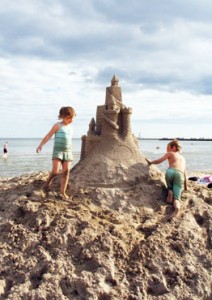 Children create their own castle during the Cobourg Sandcastle Festival

Lara Scott said she was able to do an economic impact study for $1,000 through the Festival and Events Ontario non-profit organization, which normally would cost between $10,000 to $20,000. She presented the findings of the survey to council Monday night.
Through the festival organization, she joined with 48 other tourism groups to have a study done last year by Toronto-based Enigma Research.  It found the event brought in about 7,000 people, of which 5,110 people were from out of town. It generated about $349,000 in spending by those people on things like accommodations, food and admissions, among other things.
Local people spent about $81,000, according to the survey.
The people who attended were mostly couples with children from the Greater Toronto Area with household incomes of ranging from $75,000 to $199,000.
Mayor Gil Brocanier said he is pleased to see the benefits this event has for the town.
“I was really pleased to see it was generating quiet bit of money into the local economy through the service sector, which is the food industry and accommodations. So I think that is really good news. It is showing me the sandcastle event is doing what it was suppose to do,” he said.

Most people drive from Toronto and do not stay overnight.

But the biggest payout of the study is the ability to attract sponsors. Scott said she has undervalued the event in the past and could charge up to three times more now that she has the hard figures to back it up.

The impact study also paves the way to accessing more government grants and other public funding, she added.

A similar study was done for the Ribfest last year, she said. Rotary also did an economic impact study on the Waterfront Festival in 2005, showing it had a direct impact valued at about $1.3 million.

Scott wants to see similar studies done on other events. Another study of the Waterfront Festival, along with the Cobourg Triathlon or First Night celebrations would be good examples, she said.

“I think it validates what we are doing,” she said.