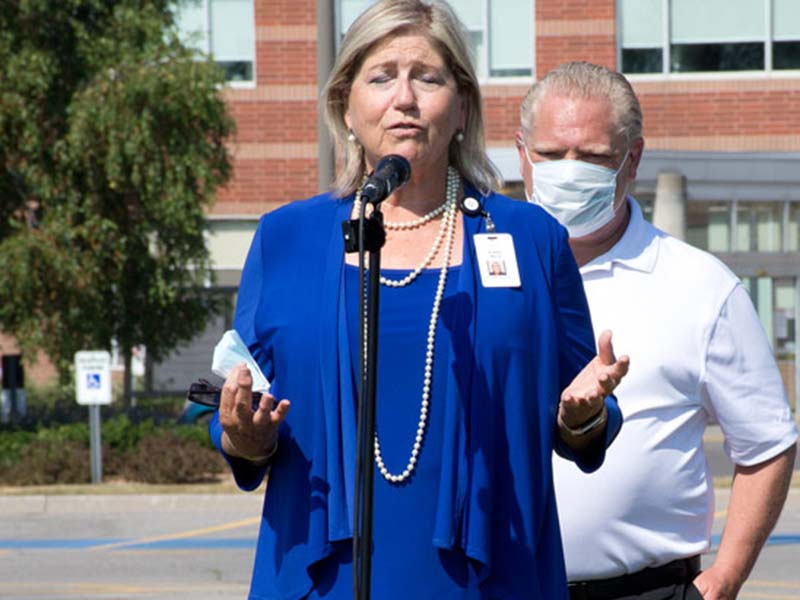 Northumberland Hills Hospital CEO Linda Davis speaking at a major funding announcement In July as Premier Doug Ford stands in the background. The government gave a 10.8 percent permanent increase toward the annual budget. This was an emotional moment for Davis, who fought many years to get sufficient annual funding for medium-sized hospitals like NHH and others across the province.

Cobourg is a long way from a farm in Alberta where Linda Davis, the CEO of Northumberland Hills Hospital, grew up. Yet, you will hear her mention several times in this interview about her love of being in the barn. Her daughter is an equestrian. And she loves spending time with her daughter.

Last week, Davis announced her retirement. Her career spans more than 30 years in health care. Starting as a nurse in Edmonton, she moved from the frontlines to management, working across the country, including British Columbia, Quebec, and finally Ontario.

She arrived in Cobourg on Nov. 18, 2013, having just left a hospital in Collingwood. She arrived at a time when the hospital was struggling with its budgets and the demand for services was growing with the aging demographic. As you will hear in this interview, one of her proudest moments was the victory of finally getting the Ontario government to provide more annual funds to support middle-sized hospitals like Northumberland fully.

We also took a few moments, in the end, to talk about the situation with the hospital and the pandemic, patient transfers, and upcoming mass vaccinations.