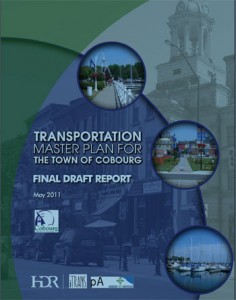 A Cobourg councillor feels town staff and a bit of common sense might have saved taxpayers about $71,000 to produce a roads study last week.
Councillor Donna Todd said the skills already exists within the town staff and people know what intersections and roads need work so there was no need to hire HDR/iTrans, of Richmond Hill to carry out a nine-month study to produce the Transportation Master Plan.
“I feel we do have the talent on staff already and when we go and purchase these consultant’s studies that we know the information,” she said after the council meeting on May 24.  “We know where the routes need to be and I find it a little disturbing that we spend money on all this information that is already we know first hand.”
Todd was even more upset after council approved a tender for the reconstruction of James Street West from George to Spring streets at a cost of $472,196 without any reference to the Transportation Master Plan.
“I just feel that when we have a study in one moment and in the next moment we are approving construction, we approve a construction that we incorporate the values of that study that everyone endorsed,” she said.
Public Works Director Barry Thrasher represented the town in the development of the transportation master plan and he is in charge of road reconstruction. When Todd questioned him directly during the council meeting about incorporating items related to the study in the James Street reconstruction, he said there was no need.

Todd openly disagreed, saying she wanted to know why there were no sidewalks or cycling paths.

The Munroe/Park/Division streets intersection was highlighted as a unique problem for the town. It is one of the places with the highest number of collisions, about 17, in Cobourg between 2007 and 2009.

The intersection does not line up creating a jog in the road. There are also six driveways, which enter or exit off of Division Street, creating additional traffic and confusion.

The study also looked at the transit system, local pathways and cycling lanes, as well as projecting what would be needed in the future.

Based on projected growth in population over the next 20 years, Cobourg could have as more than 28,000 people, up from its current 18,000. In order to accommodate the increase in traffic, the town should consider work on Brook Road North, DePalma Drive, Kerr Street extension, Rogers Road and White Street.

Improvements to the local transit system included a bus stop at the new Cobourg Community Centre, an expansion of the evening service and providing service to the New Amherst subdivision.

Adding to the cycling paths to create a network throughout the town was also proposed, along with a series of enhancements along Elgin Street, Burnham Street, William Street, among others.

The plan will come before council for its final approve on May 30.

One thought on “Transportation study should be done in-house, says councillor”