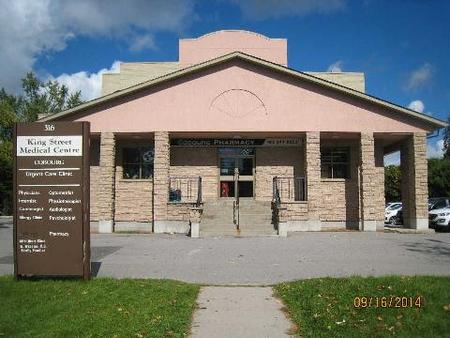 A proposed $10 million medical arts building adjacent to the hospital is a wonderful idea on the surface. But, what will it mean in terms of vacant space once it is completed?

Currently, there are five health centres or medical buildings listed on the town’s website, including ones on University Avenue, Burnham Street, and Queen Street.

The largest white elephant is the King Street Medical Centre across from Cobourg Collegiate Institute, which has sat mostly empty since it was first built in the early 2000’s. It was even proposed as a possible site for a new police station back in 2005, things got so desperate.

It may be fine to develop an additional 40,000 sq. ft. of professional office space, but what happens to all the offices left behind. Those landlords are left struggling for tenants.

What’s even more incredible are the other professional buildings being proposed.

A new building is being erected next to the Lion’s Centre on Elgin Street in the east end. Signage is up for other proposals around town, including, more recently, the northwest corner of Ontario and Elgin streets, across from the Mill Restaurant and golf course.

But, it is not just office space.

Then, there is the new location for Dollarama in the old Zellers building at Northumberland Mall. While it is encouraging to see growth and expansion at this location, it does not fill the entire space. There is nearly 140,000 sq. ft. still empty.

So far, there are no public announcements about what is going into the old location.

The same holds true for the Home Hardware superstore being built on Division Street. Two stores will move under one roof. A great plan. But, it leaves two empty retail spaces in high profile locations.

In the fall, it was reported there was nearly 500,000 sq. ft. of vacant commercial space. There is slightly more than this laying around as empty industrial space.

The town is losing money. No figures are made public. But during an interview in September, Chief Administrative Officer Stephen Peacock made a chilling remark, saying many of these vacancies have been around a long time. In fact, it is built in to the town’s budget.

While entrepreneurs are always passionate about their project, town council needs to be far more prudent. Rookie politician Brian Darling, the newly anointed planning and development co-ordinator, will be under pressure as developers come knocking.

Certainly, the town benefits from each new project. It means the potential for additional tax revenue. It gives the appearance of growth during an otherwise stagnant economic period.

Should developers be allowed to come before local municipal councils willy-nilly to get approval for any proposal? Certainly, the town is vigilant when it comes to meeting official plans, zoning requirements and so forth.

It may be time to have a needs assessment attached to all proposals. In the face of such a large inventory of vacant space, developers should vigourously demonstrate market demand for a business and why new space is necessary. They should be able to clearly show why existing space is not suitable and council should pressure them to use empty space.

Some may argue this is capitalism where competition is king. Fair enough. But is it true when it comes to local the local economy?

Plunging into new ventures is exciting and tantalizing. The sight of cranes, steel structures and the activity of workers on a construction site is an icon of progress. But, it is an illusion, if all we are left with are empty structures and lost taxes.