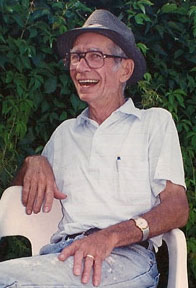 There are times during a journalist’s career when you meet people who stand out, not because they are celebrities or they hold high office. They step out from the rest because of their values, integrity and humanity. That was Jim Tunney.
Sadly, Mr. Tunney, a former Liberal senator from Grafton, died Wednesday at Northumberland Hills Hospital in Cobourg. He was predeceased by his wife Gladys recently. He was a devout Catholic, so his funeral service will be held Monday Sept. 27, 2010 at St. Mary’s Church in Grafton with interment at St. Mary’s Cemetery .
Many will remember Mr. Tunney’s most recent accomplishments as a senator for just over one year between 2001 and 2002, when he turned 75, the mandatory retirement age for the Upper House. During this time, he sat on the Standing Committee on Agriculture and Forestry. In an interview, he talked proudly about his service. He was a very patriotic Canadian and saw his public service as a great honour. There were many late nights and long days, but it did not appear to be a problem. He did not complain. And, he took the work very seriously. However, he was not without a sense of humour. When walking outside his office in Ottawa, he delighted in pointing out his old farmer’s truck in the midst of all the high-priced cars.
His service in Ottawa drew wide public attention, but it was his work within the agriculture community that was his hallmark. He was born in Grafton on June 16, 1927, as the fourth generation to a farming family. He lived his entire life in that area. He was best known as a dairy farmer, but over the years he grew crops and did other types of farming. The Cobourg Star on April 26, 1964, reported he lost 40 sheep in one night to a pack of wild dogs who were terrorizing farms in the Shelter Valley area.
He was a director of the Dairy Farmers of Canada for 18 years, a director of the Dairy Bureau of Canada for eight years and a director of the Ontario Milk Marketing Board for 12 years.
Tunney fell in love with dairy farming at 14, when he milked his first cow at a neighbour’s farm. He purchased his own 270-acre farm in 1963 with the money he saved from working at a local hardware store in Wicklow. He added 70 head of Guernsey cattle in 1968. He would become a leader in breeding Guernsey cattle.
Through his work with the various dairy organizations, Mr. Tunney was more than just someone sitting around a board table. During an interview, he recalled driving huge distances to visit farmers all across Ontario. Sometime he would sit at the kitchen table with a calculator, helping a farmer develop a budget to secure a loan. Other times, he would fill out forms to assist a farm family qualify for a government program.
For this reason and many others, he was a vocal supporter of marketing boards, speaking up over the years to ensure they were maintained. He fought vigorously against the North American Free Trade Agreement, particularly the section related to agriculture, to ensure farmers were not going to lose their support systems.
Mr. Tunney also worked with farmers internationally, as well. He travelled to Eastern Europe to visit with dairy farmers in the Ukraine, Russia and the former Yugoslavia, sharing his vast knowledge in 2003. Many of these farmers were impoverished and struggled. He spoke with compassion and empathy about these farmers, who face great difficulties with little government support.
His support of marketing boards went beyond dairy. In letters to the local newspapers, he advocated to keep the Canadian Wheat Board. He also served on the agriculture advisory committee in Northumberland under former MP Paul Macklin.
Beyond agriculture, Mr. Tunney worked hard to support his community. He served on the Victoria, Northumberland & Clarington District Separate School Board for 16 years.
He also fought to save the Tallgrass Prairie in Haldimand-Alnwick, making a presentation to the township council..
He was very generous with his time. He came to Loyalist College as a senator to participate in a special online project called Sustaining the Family Farm in 2001. He sat on a panel that held a live, streamed discussion over measures needed to help maintain family farms.
After that, there were several opportunities where he graciously granted extended interviews. It was at those times, this worldly man seemed just like anyone else, sitting in the living room of his family home. He would spin amazing stories of his work and life experience. He was a passionate, dedicated advocate, driven by a moral standard of service to community and devotion to others.
He will be missed.