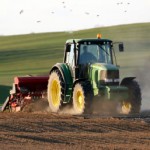 County staff dismissed the request, saying most of the examples given by the federation are cities (urban) rather than rural. Once the rural municipalities in Eastern Ontario were contacted, it turns out the rate is 25 per cent.

In an effort not to totally alienate farmers, a review of farmland taxes will take place over the year.

The Ontario Federation of Agriculture is stirring up the issue as it warns farmers about potential issues around property assessment. In a notice sent out last week, it raises concerns about how farmland is being classified. In some cases, farmland is being assessed as residential property and not farmland. And, if farmers are going to be eligible for lower tax rates, this could be a major problem.

But more worrisome that this is the decline in farming and the number of farmers. The number of cattle farmers dropped seven percent in 2011 compared to 2006, when the Canadian Census was done. That is nearly 5,000 farmers walking away from the job. The number of pig farmers also dropped.

Also, the average farmer is getting older. Nearly 50 per cent of farmers are over 55 years old., up by 10 per cent during the same period.

The county’s actions fly in the face of numerous reports and studies done by staff in the past.

Agriculture is a major industry in Northumberland. Farmers struggle to make ends meet. It is ironic county council will spend money on promotional plans, branding and other items, yet when it really counts on the bottom line for farmers, they get pushed aside.