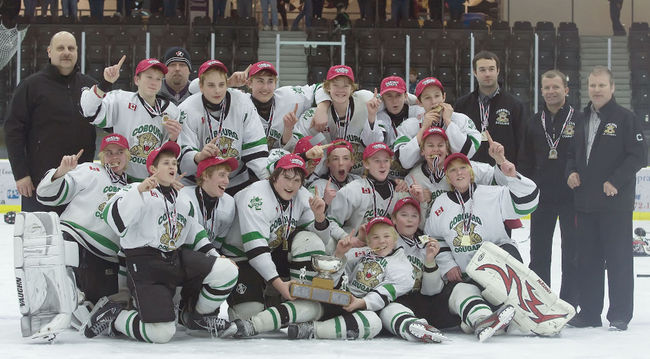 In one of the most spectacular runs in recent local hockey history, the Port Hope Panthers rallied from a 3-0 series deficit to play a thrilling final game for the Schmalz Cup last Friday.

The 1-0 loss to the Essex 73’s was heartbreaking. But it does not take away from a stellar season with a first-place record of 31-8-1. The next closest team, the Nappanee Raiders, was 18 points behind the Panthers.

It was a glorious playoff run as the Panthers defeated the defending champions, Picton Pirates in five games and then went on to sweep away Nappanee in a mere four games to win the Empire Junior C Hockey League.

If this wasn’t enough, Port Hope went on to knock off the Clarington Eagles and the Allison Hornets in the OHA Schmalz Cup, taking them to the coveted championship game.

The formidable Essex club brought a wealth of experience since the three previous runs at this level, losing to Picton in 2013 and the Lakefield Chiefs last year.

There is no question it was a tremendous effort by the Panther players and coaches.

It was a similar fate for the Cobourg Cougars, who battled back in its series against the Trenton Golden Hawks after falling behind 3-0 in their OJHL North-East semi-final action back in March.

The team placed second in its division with a 36-13-1 record in regular season play.

All of this bodes well for local hockey.

Over the past few weeks, we delight in seeing the numerous photographs of the awards ceremonies as players at every level are honoured.

On top of all of this, the Ontario Minor Hockey Association gave its blessing to the merger of the Cobourg and Port Hope hockey associations. Under the new structure, the novice, bantam and pee-wee boys hockey will be combined.

With the $6 million renovation of the Jack Burger sports complex, it will mean the players will have some facility upgrades, as well.

Let’s not forget the growing success of the Northumberland Wild and the women’s hockey league as they distinguish themselves.

At a time when local hockey is overshadowed by stories about overzealous parents, violence at minor hockey league games, and lawyers showing up to Toronto hockey association meetings, it can be a bit discouraging. Reports of misbehavior, insults, attacks and outright assaults taint the waters easily.

But not everything is bright. In 2012, just over half a million young people were enrolled in Hockey Canada, that is down by 200,000 from its peak only a few years earlier.

In 2013, it cost approximately $740 to purchase below average equipment for one youth player and that amount goes up substantially when buying higher end equipment or buying for a teenager, according to CBC reports.

No doubt, these pressures play out in local arenas.

The success of the past season will energize fans and inspire youngsters to enjoy the national game. But, the statistics are worrisome. Hockey is in danger of becoming a game for the elite. And, that would be a bad thing for Northumberland.

It would also be sad to see teams like the Panthers and Cougars lose their local connections. As Belleville watched in horror as the owners moved the Bulls to Hamilton this past spring, these teams are business enterprises. Keeping the stands full, the advertising revenue flowing and the facilities top notch are major considerations.

Still, just like the game itself, everything can turn on a dime. Let’s hope for a great series of prospect camps, along with a good off-season as we look forward to next year’s campaign.