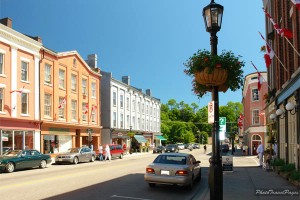 There was a notable focus on downtown economic development last week as Port Hope and Cobourg stepped up revitalization efforts.

Limelight Advertising and Design Creative Director Peter Gabany, working with the Heritage Business Improvement Area and Economic Development office, launched a new initiative with six posters in the windows of empty stores in the core.

Rather than seeing an empty store, the poster suggests it should be viewed as full of opportunity.

The idea came to him from a recent trip to New York State, where he saw a similar promotion. Port Hope has watched as several retailers in the downtown closed recently.

But Port Hope is not alone as Cobourg announced it is acting swiftly on one of the recommendation of its economic development advisory committee to create a Downtown Task Force to co-ordinate a revitalization study.

It’s all part of the new multi-year economic development and tourism strategic plan released to Cobourg council earlier in the week. The $20,000 budget for a revitalization study will be part of the 2012 annual budget deliberations. There is no indication if the chamber or the Downtown Business Improvement Area (DBIA) will kick in any funds.

While there is no doubt downtown core of municipalities in Northumberland and elsewhere are hurting, it raises a number of questions.

Business failure statistics in Canada show about 96 per cent of small business (one to 99 employees) survive one full year, about 85 per cent survive for three years, and 70 per cent make it past five years, according to a 2009 Industry Canada study.

Without putting a negative spin on the situation, it is possible the current problem is part of the natural business cycles of any downtowns as about 30 per cent of businesses fail after five years. And, it is a perennial problem as nearly every politician faces this issue during a term.

When economic times are good, there are far fewer empty spaces, compared to tougher times. But, there is also a steady fall off as business owners fail due to weak general management, poor financial management or marketing, according to the study.

In its 1997 report Failing Concerns: Business Bankruptcy in Canada, Statistics Canada said the main reasons for failure is inexperience management, knowledge or vision to run their businesses.

Recent local efforts to organize business mentorship programs have tried to address this by pairing up experienced, successful entrepreneurs with newbies.

This begs the question: What will the new revitalization study accomplish, really?

Incentives already exist to improve storefront facades. Grants and funding opportunities also are available through various agencies. The economic development officers go around and speak with these owners as a matter of course. Landlords even get tax breaks when a store is empty.

Last summer, local activist Joe Sherman and his wife appeared before the Cobourg Heritage Advisory Committee demanding to know why the committee and council were not taking the downtown revitalization seriously. They did not need a study to recommend a series of steps to kick-start things.

Rather than paying out new money, maybe the economic development officers or town staff could dust off previous studies and past debates to cull unfulfilled recommendations and proposals.

Maybe a summit could be held for all of the players in the economic development game to come together and share information and ideas. There are certainly plenty of organizations and staff around from various levels of government and agencies in Northumberland.

Meanwhile, politicians could slow down for a moment to consider if the current situation is not part of the natural ebb and flow of a business cycle before rushing off to hire another consultant to make a series of recommendations that maybe could come from existing local resources and common sense.

Something must be done. But, it might be wise to make sure all the gold is mined before we close the old shaft to build a new one.