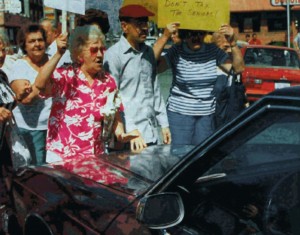 Seniors are under attack from politicians hell-bent on balancing budgets regardless of who ends up paying in the long run.

Recently, a number of announcements from all levels of government seem to have the elderly in their crosshairs.

First, locally, Cobourg council approved in principle a $1 seniors fee for town-run programs. Director of Public Works Bill Watson told council it is costing taxpayers nearly $100,000 for seniors’ programming, along with another $36,000 for use of town-owned space. Already, the Cobourg and District Seniors Activity Committee is collecting $11,000 annually, along with a $42,500 provincial grant. Still, it is leaving the town shy of its actual costs.

Next, Port Hope residents fight to maintain property values in the face of some major questions about the commitment by government officials saying they will get a fair deal. While this issue affects all residents, it potentially could be more devastating for seniors.

For many people a house is one of the few long-term investments meant to provide affordable shelter in later years and a rate of return sufficient to generate revenue for retirement if sold. To have this major investment devalued due to circumstances beyond most people’s control is unfair and hurtful in a myriad of ways. Council’s support is critical for those seeking help.

Yet, it is not just local governments. A series of provincial budgetary recommendations from economist Donald Drummond is expected on Feb. 15. A number of suggestions were already leaked, but several in particular focus on reducing the healthcare budget. The Ontario Health Coalition predicts cuts to hospital beds, acute-care spaces and home-care services, as well as delisting medical procedures like hip replacements.

Not to be left out, the federal government is considering changes to Old Age Security, an income program aimed at the poorest seniors, providing supplementary payments for those do not have enough Canada Pension Plan income to live.

Considering seniors are identified as the most active political demographic in Canada, surely everyone in government must have gone insane. Certainly, those seniors who planned to have a nice, quiet retirement may be out of luck. , It is time to go out and get a new pair of comfortable shoes because there are going to be plenty of protest to attend in the future. It also might be wise to pick up some poster material, too. As much as you can find, in fact.

Sure a dollar here and a service there may not seem like a big deal in the face of horrific budget deficits faced by all levels of government and shouldered by all taxpayers. No matter what twisted logic may seem to justify these actions, it ultimately will be indefensible.

Still, in politics, it is vital to consider your opponent when picking a fight. While the stereotype of elderly may be people who are frail, it is a wickedly inaccurate.  As individuals they are full of life and, as a group, they are pretty powerful.

If winning is the short-term goal for all politicians these days, than these moves are bad news. Anyone thinking this group might forget what is being done to them by the next election is seriously delusional.

It is time to go back to the drawing board. Rethink the strategy. Pick another group. Or, show a spine and raise taxes on those on the one per cent who can truly afford it.