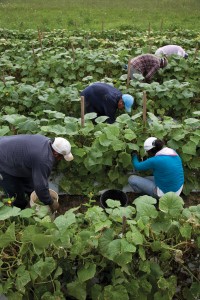 Over the next few weeks, it will be important for local farmers, and other people who used temporary foreign workers, to watch how the federal government rolls out a plan to push people on unemployment to do menial work for minimum wages.

It is part of a much deeper attack on the country’s poor and those who struggle to find work at a time when economic growth is slow and people continue to face layoffs. It also plays into many myths about those who receive social assistance.

Human Resources Minister Diane Finley is expected to release details of a plan that will take healthy, unemployed Canadians and direct them into unskilled, physically demanding jobs, like picking crops.

The first sign of change came when Immigration Minister Jason Kenney asked publicly last week why employers in New Brunswick, Nova Scotia and P.E.I. are bringing in temporary workers when those provinces have high unemployment rates.

He said the government is trying to connect unemployed workers with employers, but did not go as far as to say people would get kicked off Employment Insurance for refusing to accept an available job.

However, he tipped his hand a bit further in an interview to reveal the darker side of  the plan.

“One of the things that I find that Canadians are most frustrated with is the idea that we would be giving Canadian jobs to people from overseas rather than ensuring Canadians have first the crack at it,” he said in a Globe and Mail article last week.

That is the neo-conservative code for: “Get those lazy bums off their butts and go to work instead of taking a free ride from the government.”

Farmers are saying local people do not want menial jobs like picking crops and other hard physical jobs, so the only way to get workers is to bring them from other countries.

Many Northumberland County farmers, particularly those with apple orchards or very large operations, use foreign workers. In 2010, there were about 30 foreign workers at seven farms in the region according to the New Canadians Centre in Peterborough, but not all migrant workers are tracked by the agency.

This kind of talk resonates with some people because it feeds the stereotype of people on unemployment insurance and it appeals to the Conservative Party’s core supporters.

In a recent article, the Niagara Region Director of Social Assistance said it is a commonly held belief people choose to be on social assistance. But, it is not true, she said, adding people want to work and it is very difficult to survive on the amounts of money the government provides.

The Canadian Council on Social Development did a national study on welfare-to-work programs. It found that most of these programs were based on a set of false assumptions: any job is a good job and people on social assistance should not be better off than other.  The study said these kinds of program do not work.

Forcing Employment Insurance recipients to do menial physical labour is the wrong approach. And while no sane government would ever go that far or be so obvious to blatantly make people take jobs, there are certainly ways to back people into a corner so they have to take jobs or else lose their benefits.

While Finley’s plans may be heartening news for hardcore neo-conservatives, it may not be as welcomed by farmers who may be employing these people.

The council on social development said a  proper system should follow the principles of equity, where people are evaluated based on family situation and personal level of ability; there should be voluntary participation; and the program should promote dignity and independence.

As the details are revealed, the Conservatives must be held to these standards.

Getting healthy, able-bodied people back into the workforce is a noble goal. Boxing them into jobs they don’t want will cause more problems than it solves. At the same time, it must not demean people who are already facing hard times in a tough economy.