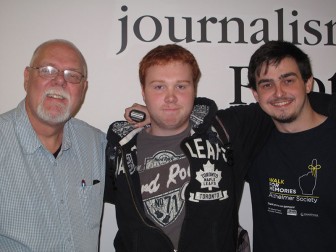 Movember team – (l-r) Myself, Sean McIntosh and Mark Hodgins just before we shaved our facial hair for our Movember campaign.

My daughter is refusing to look at me for the next month.

That is because I shaved my beard and moustache off on Oct. 31. This has only happened once before, about three years ago. Until then, I had facial hair since I was 18-years old, either a goatee or a full beard.

The reason for this brash change in appearance is something called Movember, an international fundraiser supporting 800 programs in 21 countries helping to improve men’s health, specifically prostate cancer, testicular cancer and mental health. It is a chance to help out after my grandfather died of prostate cancer.

So, joining with students, representing both genders, in the journalism program at Loyalist College, we are going to see how much we can raise over the next month.

Gender has a profound impact on health. Men live four years less than women, on average, according to World Health study statistics released in May 2014. Being men, there are many stereotypes of what it means to be healthy and what we do when we get sick. Men like to appear tough, strong and stable. It is the “take it like a man” syndrome where men are not allowed to show vulnerability or weakness. When you get hurt, you don’t “act like a baby” by complaining or acknowledging the pain.

A 2011 Canadian study by four academics called Health, Illness, Men and Masculinities, shows men’s health issues are rarely examined under the lens of gender. As well, there is less health promotion and programs geared specifically for them.

The study found young Canadian men are three times more likely to die from accidental death than young women and four times more likely to die from suicide. Studies show social expectations of toughness and independence means young men suppress emotions, suffer social isolation and resist asking for help. Physical risk is naturalized, promoted and even celebrated. So, it is no surprised that young men suffer more injuries or death due to dangerous behavior like not wearing safety equipment, like a helmet, or speeding. As well, there are more cases of sexually transmitted diseases in young men because they tend to take more chances when having intercourse.

For middle-aged men, there is a culture of stoicism, where denial of bodily pain or suffering is acceptable. Men do perform high risk, physical labour, exposing themselves to increasing rates of injury, especially blue-collar workers. For those working white-collar jobs, the hardworking, achievement-oriented demands of the workplace increase stress-related illness. These men tend to suffer silently with depression, sadness, emotional numbing, substance abuse and impoverished relationships, the study found.

Older men face the pressures of an idealized, masculine world where muscular bodies,– strong and resilient – are consider the norm. Yet, for aging men, it is no longer the case, the study found. Changes from career and work life to retirement can be stressful, along with reduced physical capacity. These men are more susceptible to prostate cancer and heart disease. And. the attitudes developed earlier in life continue to influence men dealing with personal health issues. This means stoicism and toughness continue to be prevalent.

While there are many organizations and supports for women’s health, specific programs for men are fewer and not as high profile.

Organizations like the Canadian Men’s Health Foundation try to spread the word. Its goal is to help men add 10 years to their lives by adopting good habits early in life. This non-profit group circulates information, along with a website called Don’t Change Much, which is accompanied by a TV commercial. It highlights the small changes that can make a difference.

The Movember campaign began in 2003 in Australia when by a group of friends and has grown to more than four million participants globally raising more than $550 million.

All of us know man who can benefit by taking better care of themselves: a grandfather, father, son or friend. But true change will not happen overnight. Until men begin to have their own conversations about taking care of themselves and altering the stereotypes, including stoicism and toughness, things will remain the same.

It must start with kids. We can no longer chide boys to “suck it up” or “play through the pain” when injuries occur. It is one thing to train hard, but another to be hurt. They need to know it is okay to stop and heal properly, just as a lion will lie still and lick its wounds until it is better.

This is not about emasculation, but empowerment. It is about showing strength in facing personal fears. It is about having the courage to deal with demons rather than running from them. It is hearing the inner voices telling you to take care rather than be careless.

So, for the next month, for me it means looking a bit strange. Yet, it is an opportunity to enter into conversations, a time to share experiences and to talk candidly with others about men’s health. And, it is a chance for both men and women to share insights and raise money.

If you are interested in signing up to raise money, go to movember.ca or you can donate to the Loyalist journalism students by going to JournoMovember.