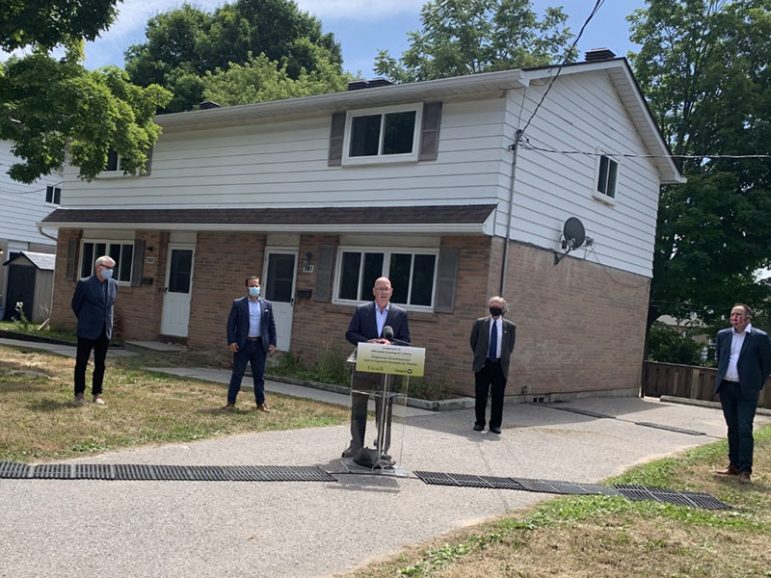 Adam Vaughan, Parliamentary Secretary to the Minister of Families, Children and Social Development, David Piccini, MPP for Northumberland—Peterborough South, along with the Honourable Steve Clark, Ontario’s Minister of Municipal Affairs and Housing, made the announcement with local officials including Mayor John Henderson.

Federal, provincial, and local politicians gathered at the corner of Elgin and Darcy streets to announce a $5.7 million grant. It will more than double the existing affordable housing from 18 units to 40. The multi-phase project represents a huge upgrade to the existing buildings that were originally constructed in the 1960s.

The housing mix will expand what is already there.

The $5.7 million from the two levels of government will cover only a portion of the costs.

The county is hoping to get started very soon. But what about the people already living there?

Here is a full version of the interview:

Show interview: Full interview with bonus material: Sitting on the Second Line Road, just a short drive east of the Alderville Memorial on County Road 45, is a white, long building next to a very old United Church. The elongated building stretching back from the road is home to the administration offices of the Alderville First Nation.

“Politics as a chronic stressor”: News about politics bums you out and can make you feel ill — but it also makes you take action

A growing group of journalists has cut back on Twitter, or abandoned it entirely

The foundations of local journalism are crumbling, as this newsletter seeks to explain each week ; over the past few years, as the US has faced voter suppression, foreign meddling, and executive overreach—and as political polarization charges the atmosphere around the world—the foundations of a democratic government can also [...] Click here to view original web page at www.cjr.org

Report from the Field: Local Community Media Flourishes on Cable in a Crisis