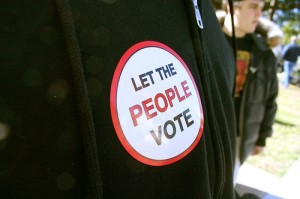 Accusations and denials over voter suppression tactics, including the use of automated phone calls and other dirty tricks, should leave every citizen enraged and all politicians ashamed.

Whether directly involved or remotely implicated, the credibility of Canada’s political system is in serious jeopardy. Sadly, the use of dirty tricks in election campaigns is nothing new; it has only reached new lows.

In Northumberland, it takes the form of stolen or destroyed campaign signs. Beyond complaining in the newspapers or to the local police, it rarely goes any further.

Then, there are the more insidious attacks on each other. One strategy is to follow a candidate going door-to-door. The opponents will come in behind and remove literature from mailboxes, only to replace it with their own.

These are but a few examples of many. And, if you think it is bad, then look at nomination meetings within the parties, where meetings get stacked and busloads of instant members are brought in from far away to cast a ballot for a candidate.

An old political stalwart once shared a story about travelling with a candidate during the 1950s. The pair stopped at the Liquor Store prior to knocking on doors in the rural part of the county. As they drove around, the candidate would talk it up with the voters while the assistant would discreetly hand out bottles of booze from the trunk.

Plying voters with liquor is a very traditional approach, going back to the 19th Century. It was a way to ensure voters would come out and an easy way to get votes. Sometimes it would go awry. Before Confederation, riots claimed at least 20 victims, all fuelled by alcohol, according to Elections Canada.

Democracy is often an illusion. As citizens, we want to think politicians respect us, listen carefully and act on our wishes. The reality is it rarely happens.

So, why is there such a great outpouring over the robocalls?

It is not because anyone in Ottawa believes citizens are hard done by or there is a crime against the state. No, it is merely to strip one party of power so the other can take its place.

Sure, there will be plenty of rhetoric, angry words spewed by the political parties at each other. But don’t for a moment think it is nothing more than theatre, as these political actors smack their lips at the opportunity to draw the blood of their opponents. Al it does is drain the life out of our political system.

This is why citizens must take a stand. Politicians must learn to stop treating voters like puppets only to be manipulated by the backroom strategists and spin-doctors. Politicians must show respect or else it will only get worse, not better.

It does not matter whether it was one rogue Conservative or the entire party, the mere fact somebody considered doing this is an outrage and a signal.

The world watches as the Syrian government under President Bashar al-Assad slaughters its own people and it is hard to believe how any political leader can be so heartless. It comes simply when the leaders no longer respect citizens.

Canada is nowhere near this point. Yet, all things begin somewhere.

When politicians don’t think citizens care, they become emboldened until someone or something stops them. It is no good to become cynical and withdraw. It is time to send a message to Ottawa, provincial legislatures and town halls across the country: Stop!

Maybe we need a Canadian spring (not the season).