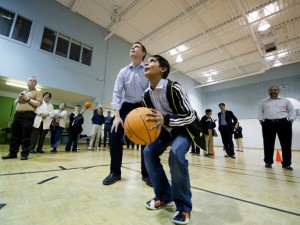 Through the hoops: Ontario Premier Dalton McGuinty watches as Julibeb Hussain shoots a basket during a visit to the Cabbagetown Youth Centre in Toronto on Sunday. Full story: http://news.nationalpost.com/2012/03/26/ontario-budget-pensions/

Sunday’s charming scene showing Dalton McGuinty shooting hoops with low income kids at a recreation centre in Toronto was a heart-warming sight that belied the message he delivered to Ontario’s poor while he was there. Claiming he won’t balance the books on the backs of the poor, he proceeded to announce a freeze on welfare rates and a 50 percent cut to previously planned increases to the Ontario Child Benefit over the next two years. If these measures don’t hurt the poor, it’s hard to imagine why not.

For starters, Statistics Canada reports the Consumer Price Index for Ontario rose almost three percent in the last year, making his welfare rate freeze a cut in any practical sense. Boasting that his government has restored twelve percent of the twenty two percent welfare rate cuts imposed in 1995, he chooses to ignore the fact that ten percent remains unrestored, and that inflation has brought the impact of the 1995 cuts all the way up to a fifty percent loss for recipients by now. The pain they and their families have endured over the years can’t be quantified like numbers on a spreadsheet, but the impacts are very real and can be seen easily by taking a look at the local scene here in Northumberland.

When the Liberals introduced their Ontario Child Benefit in partnership with the feds they held some back from those on welfare, deciding only the working poor would reap the full rewards. What they saved by not paying the full amount to welfare families they gave to municipalities and non-profits to fund programs instead. After all, Father knows best, and when it comes to people on welfare, the conventional wisdom is that they won’t spend the money appropriately so it’s better not to give them very much. Here, that money goes towards Milk for Moms coupons for the poor, although they are scarce as hen’s teeth and frequently all given out a week into each new month. Some funds go to the Nortumberland Child Development Centre, some to Food for Thought, the school breakfast and snack program, some to the Salvation Army’s Good Food Box program.

Some may go towards maintaining the County’s Food for All warehouse, it’s hard to tell from the County website just where that money originates. With a mandate to “solicit, store and distribute” food to agencies and charities, it’s a growing enterprise that partners with our local United Way too. Meanwhile Info Northumberland lists nine foodbanks operating around the County, supplying donated and purchased foods to people who rely on them to supply many of their most basic needs. Some of that food comes from the Food for All warehouse. In their publication “Re-Think Poverty” the local health unit reported in September 2011 that Northumberland Fare Share foodbanks has been providing food for as many as 2,600 people in any given month over the year preceeding the report, and that they found nearly twelve percent of locals faced food shortages in their family. Meanwhile the Health Unit calculated that for a local family of four on welfare, a shocking thirty seven percent of their income is spent just on food, compared to thirteen percent for non poor families. Considering that shelter costs for the poor generally consume sixty percent of their income, it’s not hard to see where the slogan “Pay the rent or feed the kids” came from. How many of us could live like that, for month after depressing month?

The most tragic aspect of this attack on the most vulnerable is that these cuts won’t save much at all. According to the Income Security Advocacy Centre, a legal clinic in Toronto mandated to deal with income issues of the poor, the freeze to welfare rates will save a modest sixty million dollars, the cuts to the Child Benefit another ninety million. Added together, the one hundred and fifty million dollar savings amount to less than one percent of the sixteen billion dollar defict facing Ontario. A drop in the proverbial bucket, and compared to the ever increasing pain and heartache of living in poverty, not even worth it. Campaign 2000, the group dedicated to the elimination of poverty in Canada, found that one in seven of our kids in Ontario are still living below the poverty line. Don’t they, or their parents, matter at all?

One thought on “Poverty: Premier just doesn’t get it”