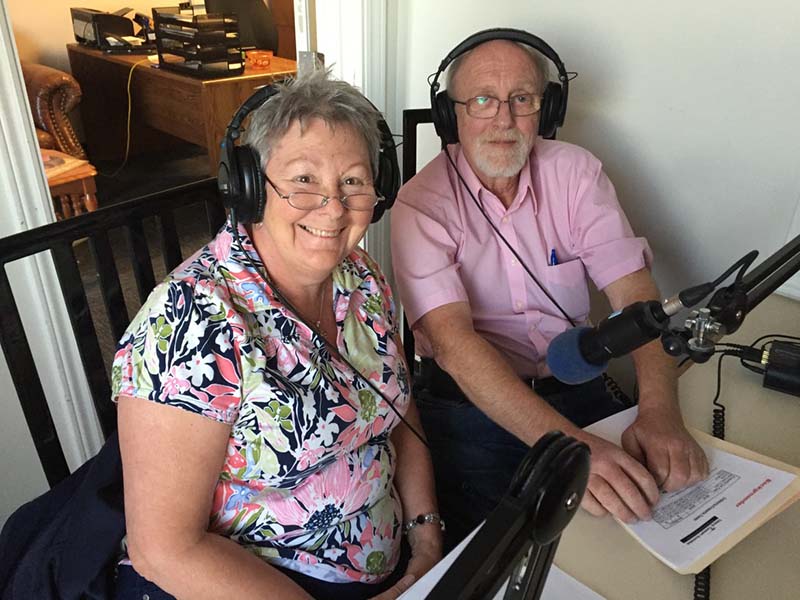 Cobourg Taxpayers Association co-founders Lydia Smith (l) and Paul Pagnuelo (r) during an interview on Consider This in the Northumberland 89.7 FM studio in 2015. Photo by Robert Washburn

(On Monday, I was asked by Northumberland 89.7 FM to produce the newscast. These are two local stories I did for the 4 p.m. update.)

The co-founder of the Cobourg Taxpayers Association and a well-known community volunteer died on Christmas Day.

Paul Pagnuelo, 73, had been ill for several years.

Pagnuelo might best be remembered as a candidate for deputy mayor in the 2014 municipal election. He was defeated by John Henderson, who is the current mayor.

He was also involved in the Preserve Our Heritage Harbour group, just before forming the Cobourg Taxpayers Association in 2015.

Lydia Smith, the other co-founder of the association, remembers meeting Pagnuelo for the first time. She was working on the campaign for Deb McCarthy in the 2014 municipal election, Smith said. They were looking for some advice and went to Pagnuelo for help.

However, their friendship grew when they both served on the heritage harbour group, she said. He invited her to join a group of people who ate breakfast at the Homeplate restaurant weekly. It was there the taxpayers association was born, she said.

As one of the leaders for the association, Pagnuelo appeared many times before town council.

Dennis Nabieszko, the current association president, said one memorable appearance was when Pagnuelo advocated increasing the councillor’s salaries in 2019.

He argued it was important to give fair and reasonable compensation to municipal politicians. It would attract younger people to run for office, plus fairly address the workload councillors face once elected.

Nabieszko said it was highly unusual for a taxpayers group to make such an argument, especially since it is so often trying to get the council to spend less.

Pagnuelo also challenged the council on multiple issues, including the zoning of a French school on Elgin Street, adjacent to the New Amherst subdivision, Nabieszko said.

Until his last days, Pagnuelo was involved in meetings and urging people to continue volunteering and working for the community, Nabieszko said.

Pagnuelo worked for 43 years in banking, where he held a variety of senior management positions, ranging from divisional operations to legislative and government affairs. Besides his local involvement in the taxpayers association. Pagnuelo was an Ontario spokesperson for the Canadian Taxpayers Association in the 1990s. He also served on its board until recently.

He survived by his wife,  Marilyn, and two children, Stephanie and Matthew.

A celebration of life is being planned in the future.

(Also in this newscast was a story about Christmas at Transition House, the only emergency shelter for homeless people in the region.) 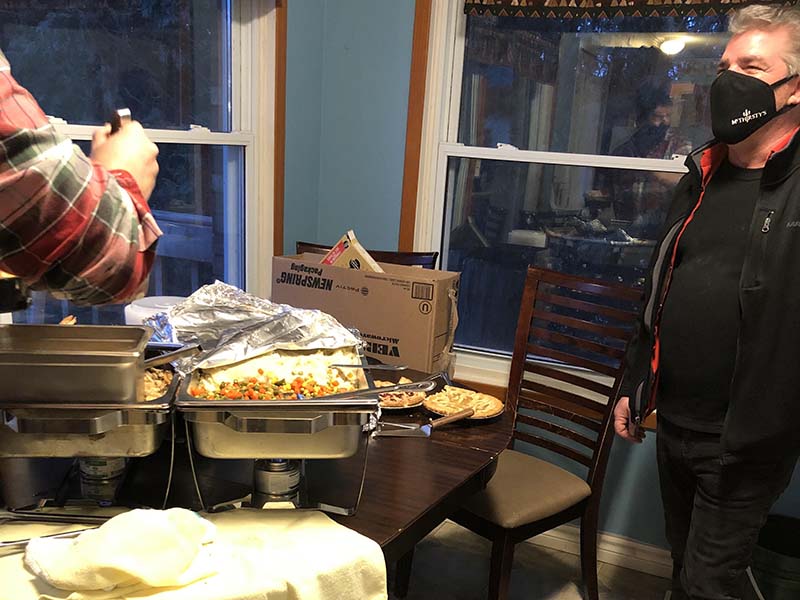 Members of Transition House enjoyed a Christmas dinner courtesy of the Thirsty Goose restaurant. Participants received a full dinner, plus gifts for the occasion. Photo provided by Transition House.

About 40 homeless people from Cobourg and Port Hope celebrated Christmas through Transition House over the weekend.

In conjunction with the Thirsty Goose restaurant, a turkey dinner was provided along with a gift for each person. The meals were held in two locations, one in Port Hope and the other in Cobourg.

Currently, Transition House is overcapacity. It is the only emergency shelter in Northumberland County. While the building on Chapel Street is full, several others are being housed in a motel or moved to a permanent residence.

Newman said it could be a very lonely time for those who have nowhere to live.