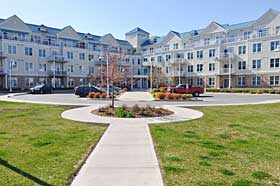 In a scene that has become all too familiar at council the last few
years, the “Condo Crowd” was out in force at last night’s council
deliberations on a proposed new noise bylaw. Attention “old Cobourg”,
DBIA, Rotarians, business owners, families, and those “others” of more
tender years: the Town is no longer yours.

There’s a new sherriff in town and you know where they live: with each
“public” question they have to identify their address.

Somehow, when they bought those places down on the waterfront someone
must have told them that Cobourg was an “adult lifestyle community” e.g.
no kids, no dogs, no “public” events, no resteraunts and no bars. And
especially no motorcycles. Did I mention barking dogs?

Don’t get me wrong. The new noise bylaw is a necessary thing–I’ll
explain shortly. And the “condo crowd” are not “nasties” by any means.
In fact they seem like a gregarious bunch, and even good-humoured in
their mutual suffering.

There are times when being an elected official must be a surreal
experience. This new noise bylaw initiative is definitely one of them.

Consider for a moment the poor woman who for two years has complained
about a barking dog. She calls the police and, as she tells it, the
police respond “What barking dog? We can’t even find a dog in your
neighborhood”.

Or possibly the more severely tormented people whose neighbors
regularly, at all times of the day and night, circle their ATV’s and
snowmobiles around the fence line of their property. Yes, in town.

My applause to Chief Sweet and Councillor Forrest Rowden for the demands
put upon them during the Town of Cobourg’s meeting on a proposed new
Noise Bylaw. Sweet was grace under pressure; and Rowden (chair for this
public meeting on this topic) an experienced Hamilton Township
councillor and Deputy Reeve for many years probably received his
“baptism of fire” on an urban issue–noise.

Somehow we have lost all “civility” in these types of discussions. And
I mean that in the traditional sense.

For instance, take Sweet (and true to his namesake) explained the
difficulty of enforcing the present bylaw. It would take 3 calls by his
officers before the final resolution would be achieved: go to court.
Then–no action. No one wanted to go to court where the onus of proof
was on them. We needed something that was enforceable by the
police–not citizens.

He made the arguement for fines. Enforced by a single sound meter (or
two–didn’t really matter, a single fine would pay for the meter).

F.Rowden always added that this new bylaw would be complaint-driven not
enforcement-driven. Again and again, he noted that.

I have my complaints: my neighbours like to cut grass on Sunday
morning–early–and I mean really early. Some are shift-workers who just
want to get the job done before they relax for the day. I go out with my
morning coffee, my morning reading in hand, and the lawnmowers start up
everywhere within a 1000 meters, I swear, instantally. And I mean
everywhere.

Somehow, as neighbors we get along. Or, at least, I have had no
complaints–and none against me (although there is that guy around the
corner with the REALLY loud motorcycle…)

But then there are the other “noise” issues–as discussed in the
meeting. Not decibals (as will be measured), but “Bass”. The “colour”
of sound as one councillor put it. Then there is conflicting industrial
sound and how it can combine to create new sound phenomenon. Cars
without mufflers. Trucks with brakes. Private snow removal contractors.
AC units. Idling ambulances. Rowdies…and what about daytime noise
violations for shift workers?

Nevertheless the motivating factor (according to Committee reports: see
page 1 of the noise bylaw is “commercial establishments and barking dogs”.

Besides the poor person with the “barking dog” issue, somehow, everyone
in the room knows where the “commercial establishment” motivating factor
is coming from. After all each public speaker has to identify
themselves by name and address.

To start with there is a complaint about “Capones”–a downtown pub.
This is met with much excitement in the crowd attending. So is comments
about the skating rink music.

A councillor notes that the Town’s “public events” and “equipment” are
exempt from this bylaw. There is much murmuring–especially when these
events and services coicide with the downtown core.

And motorcycles comes up again.

(Personally, I’m cheering for the lawnmowers: do you know what happens
when the sound of a diesel, gas, riding and electric lawnmowers happen
all at the same time–its deafening, you can’t even read yesterday’s
Globe and Mail!)

As I said before–surreal. The kids I know like the skating rink. They
also like the Waterfront Festival–as do the parents. The beach and
waterfront are always fun. There’s also been a few places downtown which
have had really good live music–I’ve been there. Sidewalk Days are
“cool”.

Oh Oh. I ask myself: Did “First Night” have more “fireworks” this year?

Everyone should go to a town council meeting on a new bylaw. Not just
the people who live downtown.

I keep explaining to people who move to Cobourg from Toronto and other
such urban centers. This isn’t the country–this is a Town. We live
here. As my spouse has learned, its much quieter on a shady lane in
Toronto than a few minutes from the 401 and a railline. 😉

Finally, my condolences to the person with the barking dog. The dogs
don’t bark in my neighborhood–although we do have them. However, when
they do bark–everyone notices. Equally, if not more so, my condolences
to the people with the backyard ATV/snowmobile drivers. Fortunately, I
think Mr. Rowden (given his experience in the Township) will have a
handle on that issue.