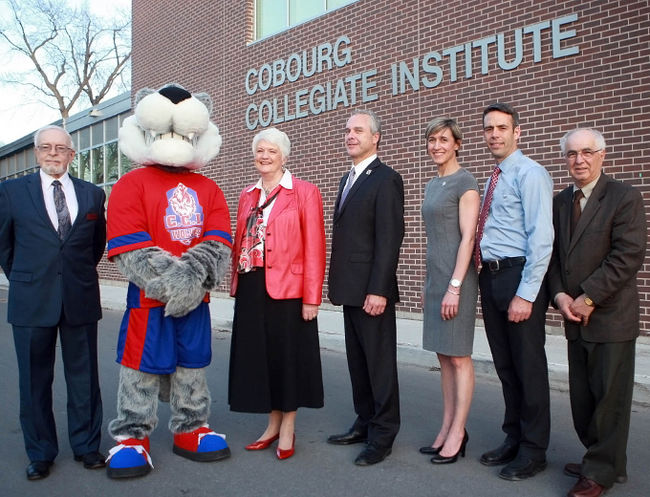 Local trustee Gord Gilchrist on far left with others during opening of the new sections of Cobourg Collegiate Institute.

The censure of school board trustee Gord Gilchrist failed to go far enough in its actions when it took steps to reprimand him over comments made during the recent opening ceremony at Cobourg Collegiate Institute.

According to local news media, a report brought before the board last week alleges Gilchrist made inappropriate comments regarding Indigenous people and their music to several students related to a drumming ceremony that was part of the celebrations.

News stories also said students reported the remarks to their parents and later to school officials. A third-party investigation was launched into the incident. An adult witness also substantiated the claims, according to the third-party report.

During the meeting, Gilchrist offered a full apology and provided a list of his accomplishments with the First Nations. He then removed himself from the discussions as the board debated what they intended to do.

Several trustees defended Gilchrist during the debate, which can be viewed on the live stream page of the board’s website.

Based on the report, trustees voted unanimously to censure the 87-year-old Gilchrist, who is currently one of the longest serving members on the board and the representative from West Northumberland.

Besides the rebuke, Gilchrist was also removed from the board’s expulsion committee. A motion to remove him from the program committee, one of the more powerful bodies on the board, was defeated due to a tie vote.

Under the Education Act, the board can censure and remove members from various committees, but cannot remove him from the board.

Principals can ban Gilchrist from school property, but the board cannot.

Gilchrist has 14 days to appeal the censure.

There is no question trustees believe he broke the code of conduct as demonstrated by their unanimous approval. But, where they failed is by not going further and removing him from all committees.

This is not the first time Gilchrist was censured. The board took a similar step in 2008 over a letter he wrote in the local news media.

It would seem appropriate for the board to exercise its full powers in this current situation. If it feels justified via the third-party report and, in the context of his previous censure, surely it is reasonable to expect Gilchrist to face the maximum penalty available.

While some trustees felt the action to remove him from committees was extreme and several defended him, the consequences of the censure are not enough.

Censure sends a clear message that the board disagrees with Gilchrist and disavows his alleged statements. But, if the board wanted to show it was serious, then it should have removed him from all committees until the end of his term. Period.

There needs to be consequences, if the board hopes to be truly credible. It shows students and parents that the board is not merely a paper tiger, toothless when it comes to demanding the highest standards of conduct from its own. And, it substantiates the accountability and ethics statements on its own website.

Principals also have an opportunity to send a message to students and parents. As the graduation ceremonies are coming up in the next few weeks, some may choose to ban Gilchrist from their property as a way of protest on behalf of their students, parents and faculty. It is a way of saying that they, too, support the findings of the third-party report.

As for the public, they will be left to their own resources to get a hold of the report and the press release and decide its veracity.

And for the rest of the trustees, they should be held accountable when the next election comes. No one should forget some of them lacked the courage of their convictions by coming up short in dealing with this incident.