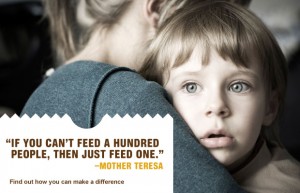 The Northumberland Fare Share Food Bank gives $900,000 worth of food to people who cannot afford it each year.

It is a staggering number considering it works out to about $15 per week per person. So for a single mother with two children, it is about $45 a week worth of groceries.

Fare Share Executive Director Duncan Mackinnon says it is hard to determine any trends these days. One month there is a drop and then, suddenly, things shoot up again, as new people come to use the local food banks located in Port Hope and Cobourg.

While there are many long-term users, the biggest turnover is those who come for short-term help. These are people who are struggling to make choices like paying the rent or eating.

The profile of people needing help from food banks is changing, according to a recently released report called Hunger Count 2013, an annual survey of food banks across Canada.

Often people picture food bank users as those on social assistance or someone who is out of work or a single mom trying to feed her children with one income based on minimum wage.

Half the families who come to a food bank are two-parent homes. And, most shockingly, one-third of those fed by food banks are children.

Food banks were only meant to be a temporary measure when the first one opened in Edmonton in 1981. Within six years, there would be 450 across the country, serving people from every province.

People and businesses in Northumberland do not forget the food bank at this time of year. Rev. Kevin Fast, with the help of St. Mary’s Secondary School football team, held a special event on Nov. 18. Businesses like Tim Horton’s, the Park Theatre, We-Fix-U and others hold special events to collect money and food. And, these are just a few.

School children from Grafton Public School are another example of pitching in last week. There are countless classrooms at school in both the public and separate school board collecting.

Sadly, the amalgamation of three United Church congregations in the Colborne area have left the local food bank without a home. The Colborne Legion primarily funds the service, but the closure of the churches means there is not a physical space to store the food and people are not sure where to go.

Mayor Marc Coombs has met with Legion representatives, but there does not appear to be any municipal space, even on an interim basis, meanwhile about 50 families are left without services.

Finding local solutions is not easy. And, to find solutions on a provincial or national scale is even more of a challenge. The federal government is reducing employment insurance by changing the criteria, making it harder for people who are out of work.

But more important is the need to ensure Canadians can get good jobs. Nothing will solve the problem faster. Hundreds of thousands of well-paying manufacturing jobs have been lost.

One only needs to look at the local economy to see the devastation. The number of lower-paying retail, accommodation and food service jobs are on the rise. These jobs are often part-time, paying minimum wage, without benefits and create a class of people who are working poor.

These issues are far harder to address. In the meantime, with all the opportunities to donate, take a moment and help out Northumberland’s food bank.