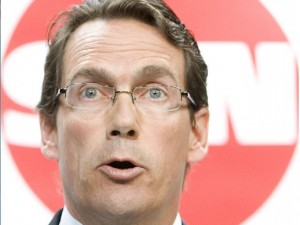 By Robert Washburn
These are troubling days for community newspapers in Ontario.
When Quebecor’s President and Chief Executive Officer Pierre Karl Peladeau stepped down last week, the news garnered headlines and fodder for newsroom chatter across the country.
While some may welcome the change at the top as Robert Depatie, president of chief executive officer of Videotron, a Quebecor subsidiary, takes over, the future of the news media division of the company is worrisome for those who think about the future of journalism in Canada.
Peladeau reported a significant drop in overall results for the division in 2012, compared to the previous year.
He blamed it on massive changes in traditional print media and a stagnant economy. Efforts to find new revenue and reducing operating costs did not fix the problem. In November, the company laid-off 500 employees, many of them mid-managers, as well as closing eight community newspapers in Ontario in an effort to save $45 million.
But, this does not come close to covering the $58.4 million the news division lost. More than half that amount was lost in the last quarter of the fiscal year, about $31 million.
Considering this was one of the few places Quebecor is losing money, questions arise about the future of newspapers in this company. Will Quebecor continue to ravage the newspapers, cutting more staff and clipping already scare resources? Or, will it try to unload the division in an effort to get rid of a financial albatross?
The Sun Media chain contains some important papers in major urban centres across Canada in Ottawa, Toronto, Winnipeg, Edmonton, and Calgary. Also, it controls some of the more historic mid-size newspapers like the London Free Press, Brockville Recorder & Times, Belleville Intelligencer, the Peterborough Examiner and the Kingston Whig Standard.
Of the 43 daily newspapers and 250 community weekly newspapers, who will want to buy them, if they are jettisoned?
Torstar, who publishes the Toronto Star and the Metroland once looked to buy a number of these newspapers when they were part of the Osprey Media company before they were purchased by Quebecor in 2006. The 20 daily newspapers and 34 community papers that made up the company were a strategic move for Torstar, since it was looking to move into many of those communities at the time.
Since then, Metroland expanded its operations to a point where it publishes 115 community newspapers in Southern Ontario. It may not be as interested this time around.
Quebecor may be able to unload some, but it is hard to imagine who might buy all the dailies and community newspapers.
It is the future of the community newspapers that is most distressing. Will Quebecor close down its unwanted local newspapers in an effort to create a more attractive combination of properties for a potential purchaser?
More importantly, what does this mean for the communities where the Sun Media papers are lost? As mentioned previously, these are historic newspapers with deep roots in the community. And despite not being profitable, no doubt residents will have lots to say if they are closed down.
The impact of such closure was pretty apparent in January when Sun Media closed eight newspapers in southwestern Ontario. Coverage for those communities was consolidated into other regional newspapers. For example, the Dunnville Chronicle, which served the community for 125 years, was shut down and the Simcoe Reformer took over. The West Niagara News was closed and the St. Catharines Standard is now serving the community.
It is hard to argue against the economic realities of community newspaper publishing. Large chains have the resources to support local news operations more readily than an independent. And, regional publications are able to draw from a larger advertising base to improve revenues. That does not mean independent publishers cannot survive, but it is certainly harder.
It will be difficult days ahead for community newspapers as Quebecor’s new chief figures out what will be done. Let’s hope it is not another lethal blow against this type of journalism, which is so vital to the communities served.