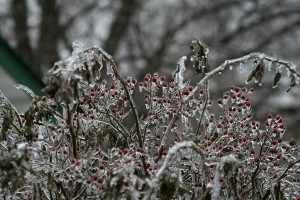 Trees and bushes are covered by ice during major storm over the weekend. Photo by Michele Washburn

It appears Cobourg council  gets a massive FAIL when it comes to providing information during the recent ice storm.

Once again, the Burd Report doesn’t miss a trick as it recorded the delayed reaction by politicians and the communications department at town hall. Sarcasm aside, it points out a blatant lack of use of social media to reach out to residents and keep them informed about what was going on. Meanwhile, crews with the roads department, the local hydro and police were trying to deal with the ensuing mayhem created by the storm. Cobourg police did a reasonable job trying to push information to the public across its Twitter account.

From the perspective of expectations, it is not surprising to see the lack of a co-ordinated response by the politicians. This is not a group of tech-savvy people. They still fiddle with their laptops at council meetings. And, they continue to use technology like it is a disease rather than a tool for communicating with constituents.

Thank goodness for information sharing of residents, as multitudes of people used Facebook and Twitter to supply critical information. Local radio stations and some news media provided outstanding updates. Still, the town should not be relying on the informal networks or news media. It has its own mandate to communicate during such an event.