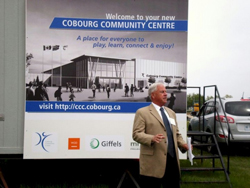 With the decision by the Town of Cobourg to operate the Community Centre Café, by providing refreshments for users of the facility, another opportunity to do some innovative local economic development is lost. The town rejected the one submission it received from a local group to actually operate the cafe, but claims other sports related groups are still interested and will be involved in staffing it and in other unspecified ways. But overall the town will provide management of the cafe, at least for now, says Paul Allen, of the centre’s operation committee. A review of the arrangement will be completed in two years.
So what else could they do? They could follow the numerous examples that can be found around Ontario and the rest of the country, where local people who need jobs and training are provided both by non-profit economic development bodies, some municipal, some not. They enter into contracts with public facilities like libraries, community centres and hospitals to operate cafes where trainees learn on the job to bake and cook, plan menus, set up displays, serve customers and do clean up. Just like a real cafe, only profits go back into the enterprise and to the sponsoring body in rental and other payments.

We need look no further than Peterborough to see successful examples of this kind of community-building economic development. There, the Community Opportunity and Innovation Network of Peterborough Incorporated, called COIN, has many projects up and running that do just that. COIN first started developing job creation projects for intellectually challenged residents, and expanded their mandate to include immigrants, the disabled and others with employment barriers. They have three ongoing projects under the COIN Food Services section; World 2 Go Catering, their first endeavour that began in 1996; the Kawartha Cookie Company, their latest venture; and Natural Blends Cafe, which has operated out of the public library since 2001.

Everyone benefits from this kind of localized job creation. The trainees gain not just job skills and a paycheque, but social interaction out in the real world, reducing their isolation as it boosts their self-confidence. The public sees that marginalized or “different” people have as much to offer as anyone else when it comes to participation in everyday life. For the municipality or institution using the services of COIN and groups like them, there is the benefit of being involved in genuine job creation for their citizens, in offsetting some of the costs of operating their facilities, and making a positive contribution to the fabric of life in their community. There are winners all round when this kind of thinking is allowed the chance to blossom into solid achievement.

With so many economic development agencies floating around locally trying to dream up job creation projects, it’s sad that none of them thought of this. It’s a proven model that works in communities just like ours, and could be as successful here as in Peterborough. Let’s hope that when the town reviews their cafe operation in two years, they will widen their scope enough to incorporate the kind of new ideas described here.

One thought on “Missed economic opportunity at Cobourg Community Centre”