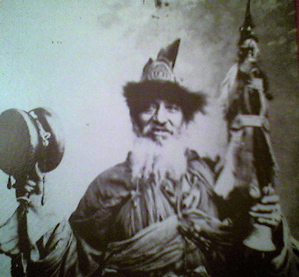 Like some ancient shaman rattling his beads and shaking his voodoo doll, Deputy Mayor Stan Frost handed out dire warnings regarding the upcoming town budget deliberations Monday night at the council meeting.Evoking the spectre of the sagging global economy, the downgrading of the American credit rating and fragility of the economic recovery in Canada, Frost forewarned fellow councillors and the public about the upcoming budget talks, which are suppose to start later this month or early in September.

His message was simple: Be wary because we are entering uncertain times and expect fiscal belt to tighten. He said the plans for capital will be done on a three to five year horizon and on a priority basis, meaning council will lock itself into a financial plan that will set goals and amounts for the long term.

In one sense, it could be a good idea. The town has a strategic plan and follows it. Sure.

But, on the other, it could hamstring the town, leaving very little flexibility. That will be at the centre of the debate as the budget unfolds.

What is worrisome is the deputy mayor’s need to create an environment of fear over economic forces that will somehow drive the local decision-making. Often these tactics are used by neo-conservatives just before they start cutting essential programs or soft services, like the town’s library or recreation.

It is used to hammer back on grants or heritage programs or other items in order to maintain the basics like roads, sewers and water purification. It can also be used to hike user fees for public services or limit the expansion worthwhile projects related to the arts or beautification. Why plant a tree when sidewalks need to be fixed?

If Frost is serious about budget cutting, let’s see the departmental reviews where staffing and efficiency are measured. Show the public, via objective-based rational, how tax dollars are being spent wisely. Then, if there is waste, let it be cut.

Otherwise, it is smoke and mirrors where decisions are made based on ideology, not hard facts.

Besides, his record lacks so far this year. Already council has dipped three times into the contingency fund to get things done: the new website, the sonar on the east pier and once again Monday night to undertake an asbestos assessment study. It is not mismanagement, but it sure does not look like good fiscal planning.

Frost might be wiser to rid himself of all the rhetorical puffery and stick to an open, transparent process that allows potential cutbacks to be given a full, rational discussion instead of the path he seems to be taking at this time.