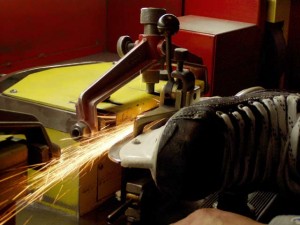 The letting of a simple contract between the town and the guy running the pro shop at the new Cobourg Community Centre was a great opportunity for public debate lost because a councillor botched the presentation.
Councillor Miriam Mutton attempted to raise concerns about the contract Monday night. Instead, she provided a confusing, inarticulate argument and lost the vote.
The bylaw was to sign an agreement with Ralph Moulton Holdings Ltd., a simple contract to run the tiny pro shop inside the new arena. It is meant to be a convenience for players and skaters, who may not have made it to the sports store to get their blades done before a game. The shop might also sell replacement laces and hockey tape, among other minor sundries.

However, Mutton rose and in a stern voice said she had asked six questions of town staff. She repeated each question and the answers given. In her analysis, the town was leasing this commercial space for 0.52 cents per square foot. It is a paltry sum considering various property owners are getting anywhere from $10 to $20 per square foot or more.

The points are excellent ones. But from the perspective of the average individual or even the public gallery, it really wasn’t clear in the moment. The six questions bounced around. She was reading the material, rather than speaking directly to her fellow councillors, public or the media. There was no motion at the end or recommended action.

Hey, if that is it, then it is a great point and no satisfactory answer came from the mayor or the deputy mayor, the great custodian of our municipal finances.

What muddied the waters further is the tender was on its second round through the system. The original contract was rejected because it was not fiscally viable.

But, here is the point (which Mutton never made), is a pro shop a public service? It shouldn’t be. It is not like a road or a water treatment plant or a matter of public security. It is a business. If it is not viable, then it should not exist.

It is not unusual for the town to be involved in contracting services and profiting. The canteen in Victoria Park is a smashing example. The town makes money, as does the contractor. However, this is not the case with the pro shop.

The appearance of uncertainty, the unclear message and the lack of direction without a motion or a recommended action for council to vote upon made it easy for her opponents to bat down her points. Simply saying she could not support the motion was meaningless. Who cares? If nothing else, she could have called on staff to redo the report with all the relevant facts, including an analysis of potential profitability. Then, the staff facts would have backed up her argument.

It is good to see Mutton badgering away on these kinds of details. It is the tiny stuff that does make a difference. But, it is clear by the way she read from her script and the awkward presentation that she was not in command of the issue enough to communicate this issue effectively.

After five years in politics, this is not acceptable. Mutton has to win some because she loses so many. Yes, she makes good points and she has a constituency that delivers her the most votes in the municipal election.

However, her lack of knowledge of the rules of procedure, her dependency on notes and her lack of communication skills as a politician make her vulnerable to criticism and undermine her credibility. This is just one example. Having watched her for the past four months, there are plenty of others.

If she could give it some polish and she could be absolutely deadly. And, we would all be the beneficiaries when that happens.