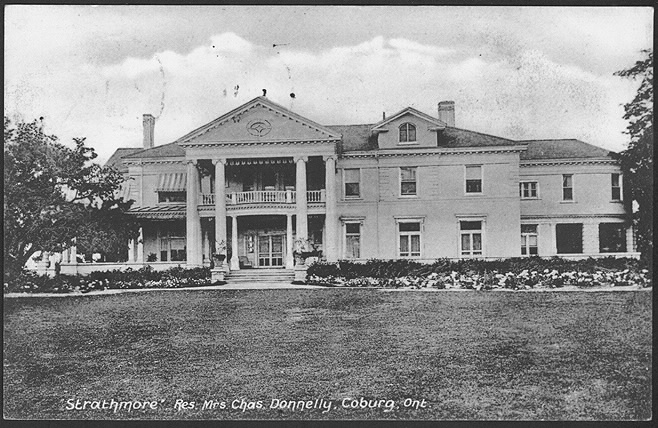 Strathmore House was built in the 1870s by a local lawyer and judge George M. Clark on King Street in Cobourg’s east end. He sold it to an American family as a summer residence in 1903. This picture was taken in 1910. The building served many purposes over the years. For the last 53 years, it was an administration building for the Brookside Youth Detention Centre. Photo from Toronto Public Library archives.

Sitting on the edge of a 70-acre piece of prime real estate on King Street, in the east end of Cobourg, sits Strathmore House. You might know it as the administration building for the Brookside Youth Detention Centre.

It is one of the last palatial historic homes from the 19th century in Cobourg. It was built in the mid-1870s by a local lawyer and county court judge, George M. Clark. He was born in Belleville and moved to Cobourg as a young man to start apprentice as a lawyer. The house is built in the Beaux-Arts style. And, it was eventually sold in 1903 and became a summer home for a rich American family.

For the past 53 years, it has had multiple uses related to the youth prison.

On Feb. 12, Brookside closed its doors. It happened rather suddenly. According to Northumberland Peterborough South MPP David Piccini, there was a leak about the closure. Workers found out.  And the minister in charge decided to shut the facility down immediately. The union was officially notified. The five remaining inmates were transferred, and 100 staff were given notice.

The future of Brookside was in doubt for the past few years. In 2012, the Auditor General identified the need to review the facility since the number of inmates was dropping. At its peak, it was home to 100 young criminals who were in their teens and early 20s.

There were other changes taking place. Government policy was also shifting as social services, police, and others began to focus on preventative programs for youth rather than incarceration. The writing was on the wall.

However, the union brought forth proposals to transform Brookside rather than shut it down. But nothing was set in stone, or so it seemed. That was until Feb. 12, when the gates were finally closed.

The future of the lands and the building are unknown. Piccini immediately set up a website to get public input for the development of the site. And, there are plenty of people with lots of different opinions.

In this interview with Consider This Northumberland, I speak with Cobourg Mayor John Henderson about what happened and what is being done about Brookside, along with its impact on the town.

This is the first of two separate interviews I did with the mayor this week. The other one was about the former Woodlawn Terrace at 420 Division Street. It will air next week.