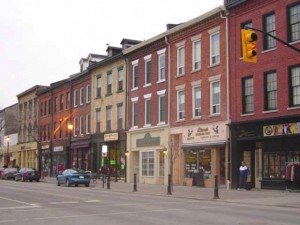 Very soon, Cobourg residents will find out if council’s $95,000 investment in a downtown revitalization project will bear some fruit.

Currently, figures from two recent surveys are being crunched and the results poured over as the various experts, politicians and business leaders think about the future of the town’s core.

While the final report is not complete and it will be up to the experts to provide detailed analysis, along with the final conclusions, some early results reveal interesting trends.

A vast majority of Cobourg residents, about 84 per cent, visit the downtown at least once a week. Their favourite places to visit are the waterfront or a particular restaurant or shop. The main reasons people come downtown is for food and entertainment, financial services or to shop. They do this because they like to support local business and it is close to home.

The survey also found people discover businesses or services in the downtown through word of mouth or the local newspaper.

People go elsewhere because they feel the selection is better, the variety of stores and services is better, hours are better and it is more convenient.

Improving store hours one of the main things people suggest, but it always has been a major issue for the downtown retailers. People would like to see hours extended beyond 5 p.m. on Thursdays and Fridays, along with Sunday opening. Expect this to be a contentious debate amongst the business owners since they often set hours by the amount of commerce they do in order to justify paying staff. It will be very interesting to see how this one plays out in the public discussions.

The perennial issue of parking found people evenly split with about 43 per cent saying it is either good or excellent, while 40 per cent say it is fair or poor.

As far as events go, the Farmers’ Market, Waterfront Festival and Summer Sidewalk Sale are the three main attractions.

People would like to see Internet Wi-Fi in the downtown, live music outdoors, more arts and cultural facilities, a year-round Farmers’ Market and a waterfront restaurant as improvements.

On the positive side, the large number of people to regularly come downtown should be encouraging. For longtime residents and business people, there is not much on the surface of these results that would surprise anyone. Hence the need for experts.

These two surveys will be combined with other demographic information, along with a comprehensive market analysis, which is currently being drafted. This will provide much needed content and context to interpret the results and create meaningful conclusions on which politicians and business leaders can act.

In the meantime, the public gets a small glimpse inside. It is always interesting to look into a mirror and study the reflection. But it should be done with care. It can be too easy to focus on all the wrinkles and imperfections rather than the beauty. So to with the study and how it reflects Cobourg.

Still, taxpayers should be anxious to get the final, full results, breakdowns and analysis once these are prepared. It will be vital residents not to get a lot of spin and doctoring of the figures. The revitalization efforts should not be a public relations exercise for those wanting to promote Cobourg or the downtown. With so much at stake, anything less than a factual, candid assessment would be an outrage.

Until then, the early figures will make good coffee shop conversation and stimulate a bit of debate in the community.