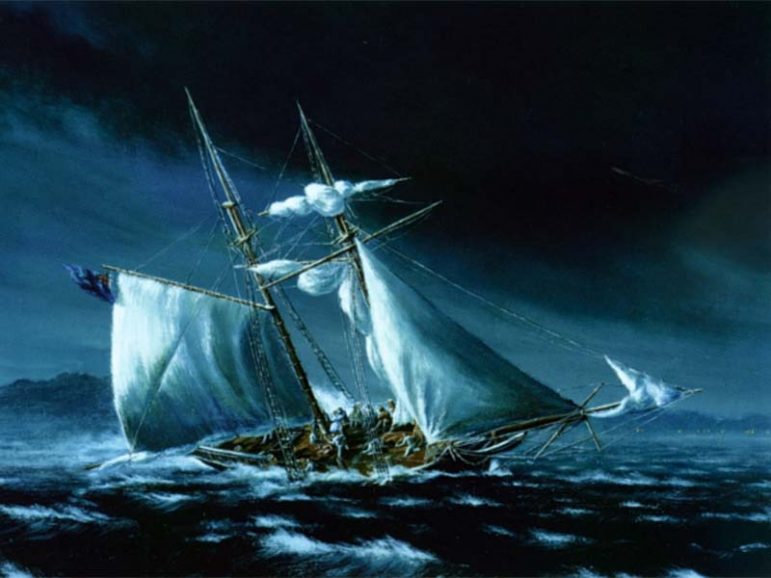 This time of year, as the fall colours are changing, it is nice to drive to Presqu’ile Park in the county’s east end. Driving along the most southerly part of the park, the view of Lake Ontario in October can be deceiving. On a bright, sunlit day, the billowing clouds over the blue waters offer a spectacular view. But when the weather grows colder, and a gale appears, the beauty disappears. It is replaced by an angry, violent turmoil of waves and wind. It is enough to sink a ship.

More than 216 years ago, a ship called the HMS Speedy left York, a place we now call Toronto. It headed east towards Presqu’ile.

Back then, a village on the shores of Weller’s Bay called Newcastle – no, not the Newcastle we know today. This was long before that. Long before Brighton ever existed. This little village was an up and coming place. There were high hopes for its future. It not only did it have some houses and shops, but it had a courthouse. The officials at that time figured it would become a major centre for the district.

The Speedy was bringing a group of very important people to hold a murder trial. This would include the Solicitor General, lawyers, the accused, witnesses, and the ship’s crew. A young Indigenous man was being tried for the murder of a fur trader.

But on the night of Oct 8, 1804, a brutal storm blew in just as they were about to enter Weller’s Bay. Something went wrong, and the ship sank. All aboard were lost.

Nobody knows where the ship sank. At least not officially, that is. But the mystery surrounding the Speedy is the stuff of local lore. It is also a story about a very crucial time in Canadian history. It is a transformative time in the development of Upper Canada. It is a story about the justice system of the day. And, it speaks to the tensions between the settlers and Indigenous people. In a time of Truth and Reconciliation, it is as relevant a story today as it was back then.

History tells us about our past. It informs our present. And it helps us imagine our future.

Today’s interview commemorates, almost to the day, the sinking of the Speedy. A new book by local historian Dan Buchanan retells this tragic tale with a host of new materials and a section on the recent efforts to locate the wreckage.

Join me for this conversation with Dan Buchanan, also known as the “History Guy.”