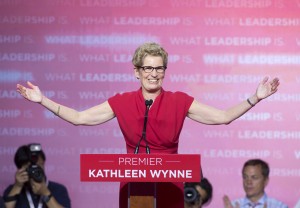 Conservative commentators, pundits and politicians are saying Ontarians were unable to face the honesty and tough love message delivered by leader Tim Hudak during the provincial election.

It would be just as valid to read goat entrails when discerning the results of last Thursday’s election where Premier-elect Kathleen Wynne won a majority with 59 seats over the 27 won by the Progressive Conservatives and 21 garnered by the NDP.

No doubt, the Progressive Conservatives are looking for some form of rhetoric to soothe the painful loss, so blaming the voters who did not support them fits in with the rest of the twisted logic that failed to deliver them to power. What would be more scrumptious would be sitting in Monday’s PC caucus meeting as the blame game unfolded. It would be a bloodletting worthy of any abattoir.

Politics is a blood sport. Forget all the forced smiles, rehearsed gestures, catchy phrases, and measured sound bites, kissing babies and staged press events. Politics is about winning. And, most politicians and political organizers will say point blank they will do whatever it takes to achieve this goal, including fudging the truth, attack ads, dirty tricks and the like.

As for voters, we are the pawns. Politics of the 21st century is based on fear and division. It is them against us. The slogans pollute the airwaves, the Internet and social media: vote for them and all is lost; if you vote for them, the enemy will win so vote for us instead; they lie, we tell the truth and so forth.

The divisions are very real. The electoral map after Thursday’s vote shows the clear distinctions. With a few exceptions, the Liberals won a band of ridings starting in Northumberland and winding nearly all the way around to the Niagara region. Tories captured all rural areas in Southern Ontario and the NDP dominated the North.

To truly understand these divisions takes far more expertise and space are needed than a meager column. But, it is striking to see the delineations. Sure, there are a few Liberal ridings dotting the rural areas, along with spots of NDP support laced throughout the GTA and the far reaches of Southwestern Ontario. But a pattern exists.

It would seem too obvious to say it is a rural/urban split. Yet, for those living in Northumberland County, it makes sense.

It is possible the pattern is based on migration trends as many seniors move out of the large urban centres into rural areas to find affordable housing and lifestyles. Farmers, small business people and seniors are often identified as being conservatives, both large and small “C”.

But these are just gross generalizations based on general assumptions, not keen insights needed to truly comprehend the patterns. Still, one message is clear. It would appear we are a province divided. When it comes to the popular vote, Liberals have just over a third at 39 per cent, while the Conservatives hold just under a third at 31 per cent. NDP supporters sit at nearly 24 per cent or a quarter of voters. The rest are those who did not vote.

There is a great opportunity for reflection by Ontario’s political class. As the Liberals take up the reins of powers, the Conservatives select a new leader and the NDP reflects on its future, they should think about on how they can bring Ontarians together, not drive them apart. If there is any hope for a future for this province, it will only be achieved when we all work together to reach a common vision of shared prosperity, equality and sustainability.